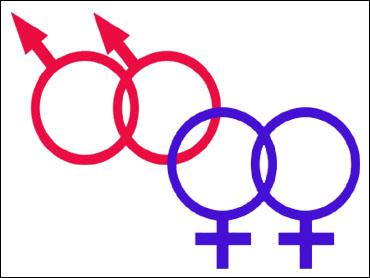 Gay rights supporters cheered loudly from the gallery as California lawmakers became the first in the country to approve a bill allowing same-sex marriages. But their celebration may be short-lived.

The legislation could be vetoed by Gov. Arnold Schwarzenegger, who has expressed an acceptance of gay marriages but said it was an issue that should be decided by voters or the courts.

"He will uphold whatever the court decides," spokeswoman Margita Thompson said Tuesday after the state Assembly approved the same-sex marriage measure, 41-35. The Senate approved it last week.

A state appellate court is considering appeals of a lower court ruling that overturned California laws banning recognition of gay marriages. And opponents of same-sex marriage are trying to qualify initiatives for the 2006 ballot that would amend the state Constitution to ban gay marriages.

The bill's supporters compared the legislation to earlier civil rights campaigns, including efforts to eradicate slavery and give women the right to vote.

"Do what we know is in our hearts," said the bill's sponsor, San Francisco Democrat Mark Leno. "Make sure all California families will have the same protection under the law."

But opponents repeatedly cited the public's vote five years ago to approve Proposition 22, which prohibits California from recognizing same-sex marriages performed in other states or countries.

"History will record that you betrayed your constituents and their moral and ethical values," Republican Assemblyman Jay La Suer said.

Leno had sponsored an earlier bill that fell four votes short of passing the Assembly in June. He kept the issue alive by adding the language of the defeated measure to another bill that had already passed the Assembly and was awaiting action in the Senate.

The Senate approved that bill and sent it back to the Assembly for another vote. Four Democrats who didn't vote the last time tipped the scales.

One of them, Assemblyman Tom Umberg, said Tuesday he was concerned about what his three children would think of him if he didn't join those "who sought to take a leadership role in terms of tolerance, equality and fairness."

California already gives same-sex couples many of the rights and duties of marriage if they register with the state as domestic partners.

Vermont began offering civil unions in 2000, after a ruling by the state's Supreme Court. Earlier this year, Connecticut became the first state to approve civil unions without being forced by the courts.

Tuesday's vote showed that gay rights advocates have "turned the corner on the issue of marriage equality for lesbian and gay couples," said Geoff Kors, executive director of Equality California, a backer of the bill.

"As the debate today shows, love conquers fear, principle conquers politics and equality conquers injustice, and the governor can now secure his legacy as a true leader by signing this bill," he said.

But Randy Thomasson, president of the Campaign for Children and Families, a conservative group opposed to the bill, said Schwarzenegger should veto it.

"Schwarzenegger can't afford to sign the gay marriage license bill," he said. "He'll actually become a hero to the majority of Californians when he vetoes it."