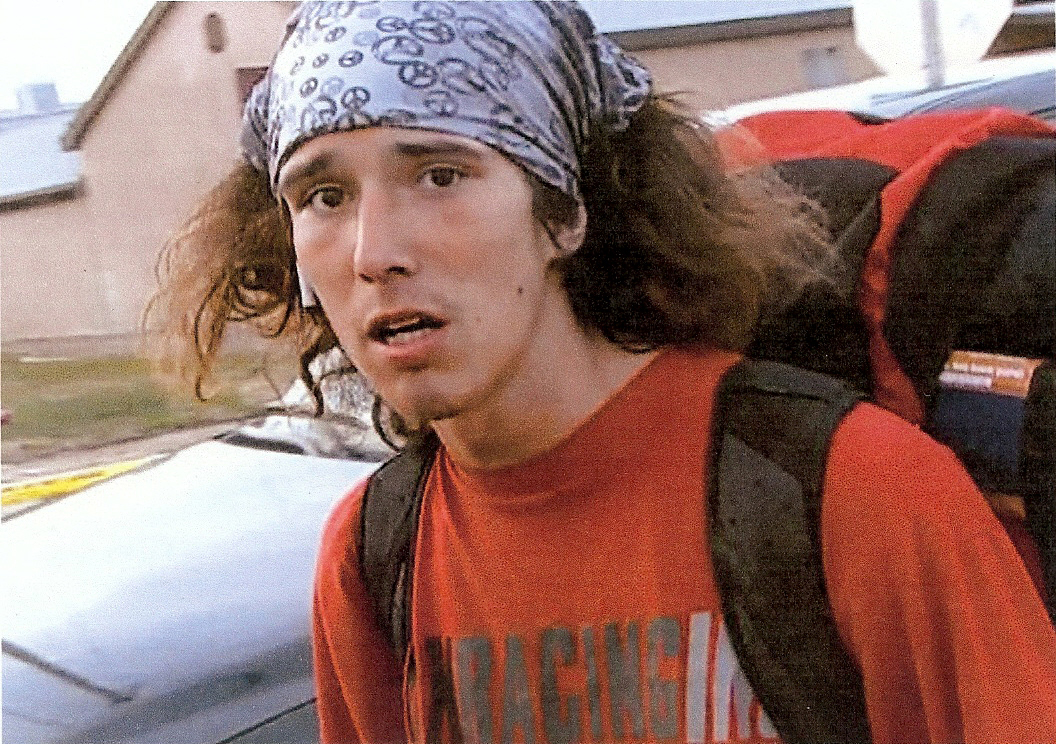 (CBS/AP) ELIZABETH, N.J. - The unlikely pair - an itinerant hitchhiker turned Internet celebrity and a lawyer three times his age - met amid the neon lights of Times Square and headed back to a squat brick home on a quiet New Jersey cul-de-sac, authorities say.

Days later the lawyer was found beaten to death in his bedroom, wearing only his socks and underwear. The hitchhiker was arrested Thursday and charged with his murder.

Caleb "Kai" McGillvary took a star turn in February when he became known to millions as "Kai the Hatchet Wielding Hitchhiker" after intervening in an attack on a California utility worker.

McGillvary described using a hatchet he was carrying to repeatedly hit a man who had struck a worker with his car, fending off a further attack.

Once lauded as a hero, McGillvary, 24, now returns to the spotlight under nefarious circumstances.

He was arrested at a Philadelphia bus station Thursday evening and charged with the murder of Joseph Galfy, Jr., a 73-year-old attorney.

"I believe that everyone is a little safer with this person off the streets," said Union County Prosecutor Theodore J. Romankow.

McGillvary will be processed in Philadelphia and sent to back to New Jersey in the coming days, Romankow said. His bail is set at $3 million.

Galfy was found dead in his Clark, N.J., home Monday, two days after authorities said he met McGillvary in New York City. Galfy, who lived alone, was found by police who went to his home to check on his well-being, Romankow said.

McGillvary's last post, dated Tuesday, asks "what would you do?" if you awoke in a stranger's house and found you'd been drugged and sexually assaulted. One commenter suggests hitting him with a hatchet - and McGillvary's final comment on the post says, "I like your idea."

It was a hatchet that helped give McGillvary a brief taste of fame in February when he gave a rambling, profanity-laced 5-minute interview to a Fresno, Calif., television station about thwarting an unprovoked attack on a Pacific Gas & Electric employee.

The interview went viral, with one version viewed more than 3.9 million times on YouTube. McGillvary later traveled to Los Angeles to appear on ABC's "Jimmy Kimmel Live!" Kimmel asked him what people were saying to him since the Feb. 1 incident. "Hey, you're Kai, that dude with the hatchet," he responded.

Romankow declined to say what object was used in Galfy's beating.

Romankow said McGillvary, who said in his TV appearance he prefers to be called "home-free" instead of homeless, traded on his fledgling celebrity to meet fans across the country.

Authorities know he was in Times Square based on witness accounts, the prosecutor said.

"He was well-known," Romankow said. McGillvary spent at least two nights in Galfy's home in Clark, 20 miles west of New York, Romankow said. The dark brick home is  neatly landscaped, with carefully-pruned bushes lining a path to the entrance. Red tape labeled "evidence" is affixed to the front door.

Authorities believe McGillvary took two trips to meet a fan in Asbury Park; Galfy picked him up after the first trip and brought him back to Clark, Romankow said.

It is unclear how McGillvary got to the train station a second time. After heading back to Asbury Park, McGillvary and the fan went to Philadelphia, then to Glassboro in southern New Jersey, where McGillvary spent Monday night.

Tuesday he boarded a train in New Jersey bound for Philadelphia, Romankow said.

McGillvary swiftly gained notoriety after he was interviewed in February.

McGillvary told KMPH, the Fox affiliate in Fresno, that he was traveling with a man, now facing charges including attempted murder, who veered into the worker.

After the driver got out of the car, he walked up to the utility worker and allegedly said, "I am Jesus and I am here to take you home." McGillvary pulled a hatchet from his backpack and struck the driver in the head several times to subdue him, The Fresno Bee reported.

"That woman was in danger," McGillvary told KMPH, the Fox affiliate in Fresno. "He just finished, what looked like at the time, killing somebody, and if he hadn't done that he would have killed more people."

Last month, the driver entered a plea of not guilty by reason of insanity, the newspaper reported.

McGillvary also told the television station that he once came upon a man "beating on this woman he calls his" in an orchard and intervened.

"I started smashing him in the head and the teeth," McGillvary said.

In a Facebook post from May 10, written from a mobile phone, McGillvary thanked the people who "invited me in, partied hardy with me," and kept him grounded even though he realized how "crazy fame can be in flippin ones life upside down. "

"ive met some of the greatest people in my life in these last three months," he wrote, "and i wouldnt trade these experiences with you for all the money in hollywood."