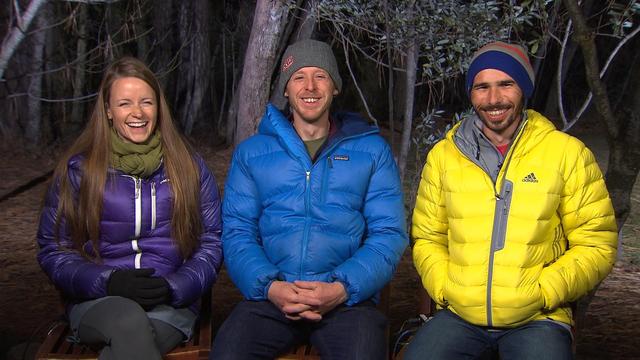 After years of planning, Caldwell and Jorgeson are celebrating their success with fans and climbing enthusiasts who came together to watch the big finale.

"There's so much nuance that goes into a project like this. Everyone is seeing the final week of the push and us coming up on top and what you don't see is the seven years of work and most importantly the vision of seeing the line to begin with, which Tommy did back in 2007," Kevin said alongside Caldwell and Caldwell's wife Becca Thursday on "CBS This Morning." "So there's a lot of back story here and there's a lot of days where there were no cameras and there was no story and it was just us up there toiling away."

For Jorgeson and Caldwell, successfully scaling El Capitan's 3,000 foot Dawn Wall is the realization of a life-long dream.

"Climbing is more of a journey of just passion than it is seeking thrills," Caldwell said.

After nearly three weeks of free-climbing the formidable granite, they were embraced by fans and loved ones when they reached the peak yesterday afternoon.

"I think their accomplishment is just amazing and the support that everyone has shown with them, kind of pushing them up the wall, has been amazing as well," Becca said.

At the base of the mountain, a crowd gathered to watch the pair conquer the final stretch and broke out in celebration as Jorgenson and Caldwell embraced on the ledge.

Tom Evans, a former climber and photographer, writes a blog on El Capitan and has been following the climbers' journey since it started late last month.

"This is a giant leap forward in free climbing standards," Evans said.

Though several others have attempted to free-climb the legendary rock wall, none have succeeded until now.

Back in 1970, Warren Harding and Dean Caldwell, who is not related to Tommy, used ropes to make it to the top.

But this time it's different. Jorgeson and Caldwell free-climbed the Dawn Wall, without using ropes or tools to carve out handholds. Instead they used strength and skill to grip tiny, sharp crevices to move up the rock.

But when Kevin hit the hardest point of the climb, only one thought resonated in his mind.

"I don't want to be guy that almost climbed Dawn Wall," Kevin said.

Along the way, the pair was forced to take rest days to allow the cuts on their hands to heal. But amid the challenges, including a series of painful falls, they remained optimistic, sharing their thoughts with a captive audience on social media.

Even president Obama was paying attention.

"It's pretty surreal to see rock climbing get this much attention, but I think it kind of points to larger themes that everyone can relate to: dreaming big, seeing their projects to the end," Kevin said. "Everyone has their own Dawn Wall so I think that's what maybe is resonating with everyone."