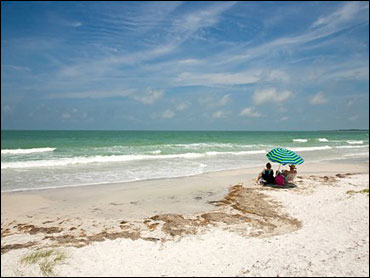 Kaylee Sturm sat in the low surf, the warm waters of the Gulf of Mexico lapping around her.

The University of Tampa senior had never been to this barrier island north of Clearwater, but she and her mom were immediately impressed.

"I like that it's natural," Sturm said, adding that she preferred it to other Gulf Coast beaches. "The water's just more beautiful here."

It's an assessment that Stephen P. Leatherman would agree with. Leatherman, a Florida International University professor dubbed "Dr. Beach," picked Caladesi Island as the best beach in the 2008 ranking for his annual list, which was released Thursday. Caladesi beat out beaches in Hawaii, along the Eastern Seaboard and in California for this year's honor.

Caladesi's somewhat remote location factored into Leatherman's rankings - and why Sturm and her mother, Cynde Jayden, were awed by it.

Wildfires and weather delay hundreds of flights in Denver

"It's an island getaway," said Leatherman, who has released his annual list since 1991. He noted that despite being in the densely populated Tampa Bay-area, many nearby residents have never visited Caladesi.

Most beachgoers reach the island by a 15-minute, $9 ferry ride. Visitors - unless they bring their own boat - are limited to four-hour stays at the beach, which is a state park.

While more remote than the tourist mainstays of Clearwater or Miami, Caladesi still boasts showers, restrooms, kayak and beach chair rentals, and a snack bar where burgers and beer are available.

Caladesi's fine, white quartz sand beach owes its creation to a 1921 hurricane, which separated it from nearby Honeymoon Island. Caladesi became a state park in 1968.

The waves are generally low on Caladesi, which Leatherman said adds to its family friendly atmosphere. He uses 50 criteria - including quality tests on water, sand and amenities - to make his assessments.

"It's not just about going out and kicking sand," Leatherman said.

But for tourists it is.

Jayden, 52, spent a recent weekday trying to get a tan before returning to her home near Pittsburgh. "I like that you can just see forever," she said. "There's no world out there."

On the web
Summer Getaways

Jake Wolf and Katie Pass, prospective dental school students from the Kansas City area, said they decided to spend part of their vacation at Caladesi because they figured it would be less crowded than other gulf beaches.

"The fact that you have to take a ferry is different, a little exciting," said Pass, 25.

Caladesi, which ranked second in Leatherman's rankings in 2007, will now be retired from the list. Most years, he has chosen beaches in Florida or Hawaii as the top-ranked. He broke that trend last year by awarding the top spot to Ocracoke Island on North Carolina's Outer Banks.

Leatherman compiles his list as part of the National Healthy Beaches Campaign, and this year plans a television special featuring the nation's best beaches, he said.

Caladesi touts itself as "the real Florida," which is on display on a nature trail that cuts through the center of island. Palmetto scrubs, palm and pine trees sprout from the sandy ground, osprey nests can be seen in the highest branches and lizards and other small animals dart through the leaves.