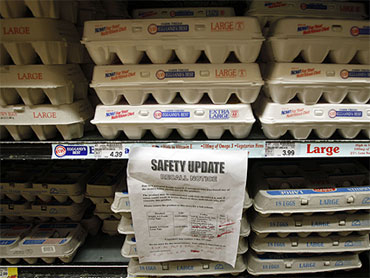 Cal-Maine Foods Inc., the nation's largest egg seller and distributor, said it is recalling about 800,000 dozen eggs related to an expanded recall tied to a salmonella outbreak.

Cal-Maine said it was notified by an Iowa egg producer that between April 9 and Aug. 19, the producer sold 32 truckloads of eggs, or about 800,000 dozen eggs, to the company. The affected products were added Friday to the expanded nationwide recall related to almost 2,000 illnesses from the strain of salmonella reported between May and July, almost 1,300 more than usual.

It wasn't immediately clear which Iowa producer supplied the Cal-Maine eggs. Iowa's Hillandale Farms said Friday that it was recalling its eggs after laboratory tests confirmed illnesses associated with them. The company did not say how many eggs were being recalled or if it is connected to Wright County Egg, another Iowa farm that recalled 380 million eggs earlier this week.

Cal-Maine said the 800,000 dozen eggs account for about 0.3 percent of its total sales for that period.

More on the egg recall:

"Cal-Maine has been actively monitoring this situation, and as soon as we learned of the expanded recall, we immediately began notifying the affected customers," said Cal-Maine President Dolph Baker. "None of the eggs were produced in Cal-Maine's facilities or operations."

The most common symptoms of salmonella are diarrhea, abdominal cramps and fever within eight hours to 72 hours of eating a contaminated product. It can be life-threatening, especially to those with weakened immune systems.

In a series of network interviews Monday morning, Food and Drug Administration chief Margaret Hamburg said her agency is limited by law to a mostly reactive stance on food safety and argued that it needs a more "preventive approach."

Hamburg said the FDA is taking the outbreak "very, very seriously." At the same time, she said Congress should pass pending legislation that would provide her agency with greater enforcement power, including new authority over imported food.

"We need better abilities and authorities to put in place these preventive controls and hold companies accountable," Hamburg said as she discussed the approximately 1,300 cases of salmonella poisoning and the recall of roughly a half-billion eggs from two Iowa egg distributors.

She also had some practical advice for consumers: Reject over-easy eggs. She said that as federal investigators continue their work with the companies involved, consumers should strictly avoid "runny egg yolks for mopping up with toast."

Two Iowa farms linked to the disease outbreak - Wright County Egg and Hillandale Farms - share suppliers of chickens and feed as well as ties to an Iowa business with a history of violating state and federal law.

But, "It's complicated. There's many ways in which the eggs can become contaminated, whether it's environmental contamination on the farms, infection of the laying hens or feed that's contaminated," Hamburg told CBS' "The Early Show" Monday. "We're still working on the details of the, you know, initial source."

The egg industry has consolidated over recent years, placing fewer, larger businesses in control over much of the nation's egg supply to consumers.