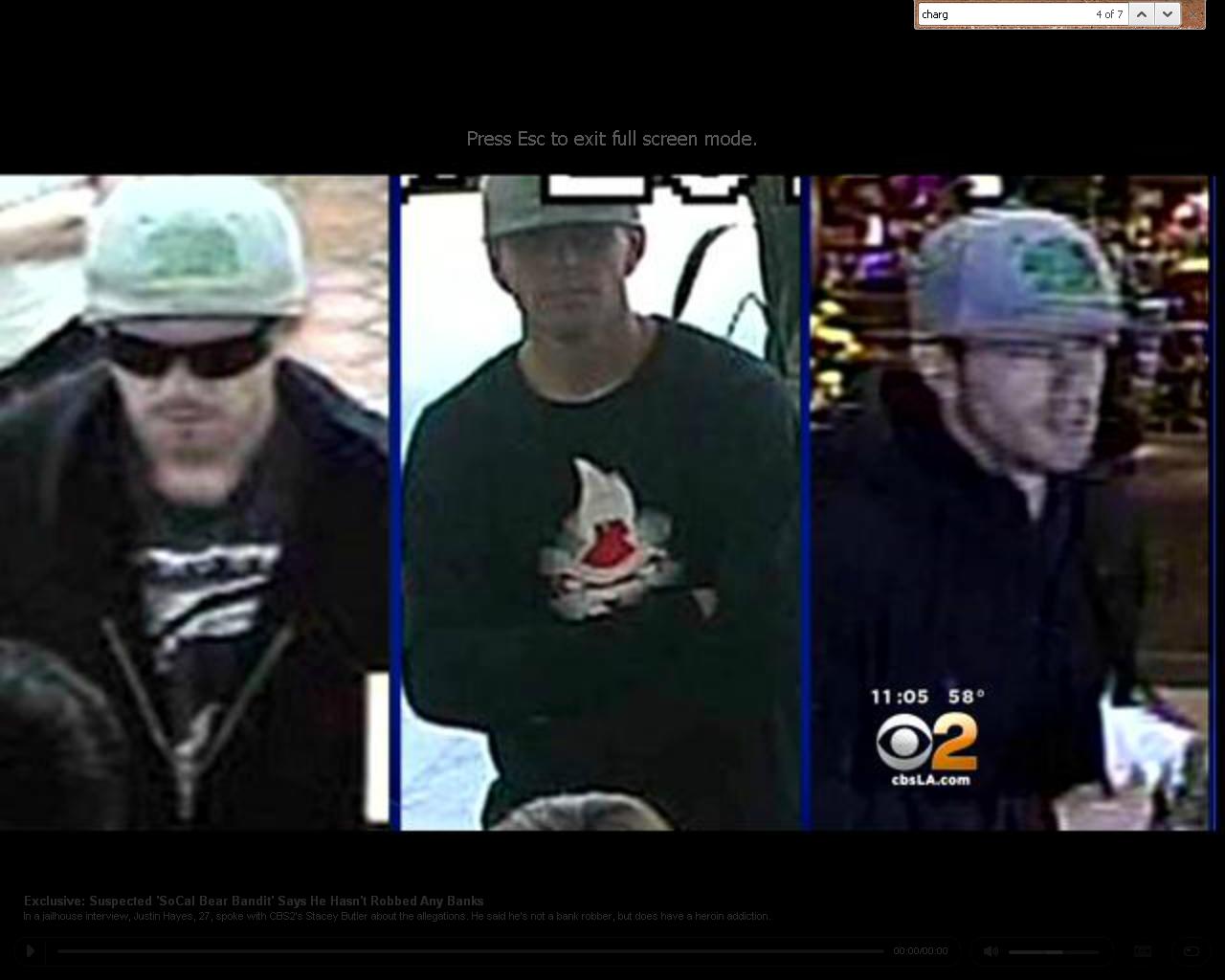 SANTA ANA, Calif. -- A man suspected in seven robberies since August said in a jailhouse interview with CBS Los Angeles that he's innocent.

Police believe Justin Daniel Hayes, 27, is the "Cal Bear Bandit." The nickname stems from surveillance images distributed by the FBI that show the alleged robber wearing a cap with a University of California, Berkeley Bears logo on it.

The robbery spree started with an Aug. 20 holdup at a Chase Bank, authorities said.

The most recent heist, on Nov. 28, was at a Bank of America branch in Fountain Valley, Calif.

In an interview with CBS Los Angeles, Hayes said heroin addiction is ruining his life, but he says he did not rob any banks.

"The drugs are my whole story pretty much, heroin. I need to be in rehab, not in jail," Hayes said.

An FBI spokeswoman said Hayes confessed to the robberies, but Hayes told CBS Los Angeles what he told them was a mistake.

"I was given some pain medication and wasn't thinking clearly," he said.

Though Hayes allegedly avoided authorities for months, the suspect's downfall began the day after that Nov. 28 robbery in Fountain Valley. Hayes was arrested on suspicion of possessing drugs and related paraphernalia, according to Farrah Emami of the Irvine Police Department. He was stopped by police who were investigating a theft from a Wal-Mart, Emami said.

Hayes was booked into Orange County Jail, but was released on Dec. 2 when prosecutors declined to file charges at that time, according to Orange County Sheriff's Lt. Jeff Hallock.

One week later, he was allegedly at it again. Hayes was charged Tuesday, Dec. 9 after he allegedly robbed another bank, before leading police on a chase in a stolen taxi.

The chase ended with a crash that injured three people.

Hayes rode in the cab to a U.S. Bank branch in Westminster, Calif. at about 3 p.m. Tuesday, according to FBI Special Agent Chris Gicking. He told the cabbie he wanted a ride to a Kentucky Fried Chicken next door and when they arrived, Hayes said, "I'll be right back," according to Gicking.

As the cab driver waited, Hayes, who was wearing a baseball cap with a Batman logo, allegedly walked through the fast food restaurant and continued to the bank.

He allegedly handed a teller a note that read, "This is a robbery. I have a gun and I'm not playing," and he escaped with an undisclosed amount of cash, according to the FBI.

Bank employees saw the suspect get in the cab, wrote down its number and called police, who caught up with the car nearby and pulled it over, Gicking said. After the unwitting taxi driver got out, Hayes crawled into the front seat and hit the gas, leading to the crash, he said.

Hayes allegedly tried to run from the crash scene, but Westminster police quickly caught him, according to Sgt. Cameron Knauerhaze.

Three victims from the crash were taken to area hospitals with non-life threatening injuries.

Hayes, 27,was charged with second-degree robbery and evading police, both felonies. He also faces misdemeanor charges of stealing a vehicle, hit-and-run with property damage and resisting arrest, according to court records.

Hayes, who was being held on $100,000 bail in Orange County Jail, may face more charges in the future, according to Deputy District Attorney Nicole Nicholson.