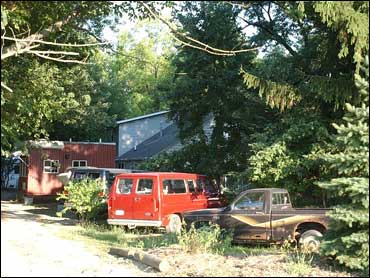 The parents under investigation for having some of their 11 adopted children sleep in cages defended their actions, saying the homemade "enclosures" were meant to protect youngsters who set fires and injured each other.

Michael and Sharen Gravelle, of Wakeman, Ohio, have denied abusing or neglecting the children, who are ages 1 to 14 and have conditions that include autism and fetal alcohol syndrome. No charges have been filed, and the children, whose situation was discovered last week, now are in foster care.

A prosecutor on Thursday said he filed complaints earlier this week against the couple in order to remove the children from the home. A trial was set for Oct. 27 to determine if the removal was justified.

The couple authorized their attorney to issue a statement Wednesday evening explaining their actions. "The children have been out of control and have caused serious harm to themselves and each other," said attorney David Sherman, adding that Michael Gravelle built the enclosures to provide the children with a secure space while their parents slept at night.

"The Gravelles love and miss their children and are devastated and brokenhearted with worry, since their children have been ripped away from them," Sherman said. "Their motives and intentions were good. They would never harm a child."

The children could be returned to the Gravelle's after the Oct. 27 trial, said Christopher Mushett, the county's juvenile court administrator.

Huron County Prosecutor Russell Leffler said in a statement he plans to meet with law enforcement officals on Monday.

The Gravelles received "glowing reports" from private agencies that reviewed them for the adoption of one of the children, said Jim McCafferty, director of the Cuyahoga County Department of Children and Family Services, which placed the boy with the couple.

Erich Dumbeck, director of the Huron County Department of Job and Family Services, said there are no limits to how many children may be placed in a home but that his agency makes the child's welfare a key factor. The Gravelle adoptions were arranged outside the county.

Ohio doesn't require home visits after an adoption. Dumbeck said his agency did not have contact with the family before Friday's court-ordered search, which resulted from a complaint that he won't discuss.

The Ohio couple are white and their adoptive children are black, a group that historically has been harder to place. In 2002, the most recent figures available, there were 127,942 children awaiting adoption in the United States, including 54,832 black youngsters, according to the Child Welfare League of America. The organization didn't tally the number of special needs children.

Keith Alford, a Syracuse University associate professor who has written extensively on adoption, said social workers may be unaware of the demands of caring for disabled children and may be anxious to find them homes.