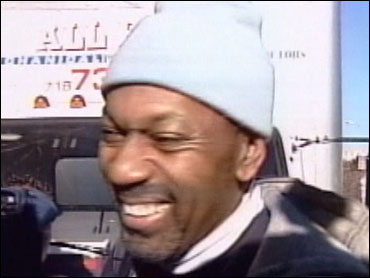 A quick-thinking commuter saved a teenager who apparently suffered a seizure and fell onto subway tracks in Upper Manhattan, by jumping onto the tracks himself and pushing them both between the rails, beneath the oncoming train.

Cameron Hollopeter, 19, of Littleton, Mass., fell onto the tracks at Broadway's 137th Street station Tuesday. Another subway passenger, 50-year-old Wesley Autrey of Manhattan, was standing on the platform with his two daughters whom he was taking home so he could go to his construction job.

When Autrey saw Hollopeter fall, he quickly took action and left his daughters to jump on the tracks to bring the man to safety as an oncoming train approached.

Autrey jumped down onto the tracks and initially tried to pull Hollopeter up to the platform but had to decide whether he could get him up in time to avoid both of them getting hit.

"I was trying to pull him up, but his weight [was too much] plus he was fighting against me — he didn't know who I was," Autrey told CBS station WCBS-TV.

Autrey spoke to co-anchor Hannah Storm on The Early Show about his heroics. To see the interview,
click here
.
Autrey said the man was still moving violently from the seizure, so he pulled him into the center of the tracks — away from the high-voltage third rail — and laid on top of him. "The only thing that popped up in my mind was, 'OK, well, go for the gutter,'" Autrey said. "So I dove in, I pinned him down and once the first car ran over us, my thing with him was to keep him still."

The subway trough between the rails, which is used for drainage, is typically about 12 inches deep but can be as shallow as 8 or as deep as 24, a New York City Transit spokesman said.

The train's operator saw someone on the tracks and put the emergency brakes on. Two cars of the train passed over the men — with about 2 inches to spare, Autrey said — before it came to a stop.

Autrey's daughters thought the train had killed their father and the teen, but were relieved to hear their father shout up from under the train that the two were fine.

Hollopeter, a student at the New York Film Academy, was taken to a hospital, where he was in stable condition with only minor injuries.

"He was so heroic," she said early Wednesday in a telephone interview. "If he wasn't there, this would be a whole different call."

Onlooker Patricia Brown said Autrey, a Vietnam War veteran, "needs to be recognized as a hero." Others cheered him and hugged him outside the train station.

The incident took place around 12:45 p.m. Service on the line, which runs between the southern tip of Manhattan and the Bronx, was suspended for about 45 minutes.