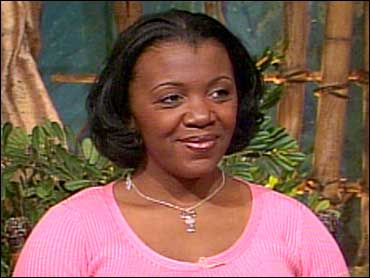 On Thursday night's "Survivor: All-Stars," there is a lot riding on a reward challenge that will trim the number of tribes, reports co-anchor Harry Smith of The Early Show. To offer some analysis of the game, he was joined by Vecepia Towery Robinson, the winner of "Survivor: Marquesas," and Dalton Ross, a writer for Entertainment Weekly magazine.

Vecepia, incidentally, is one of three "Survivor" winners who was not invited back to "All-Stars." (She hosts a cable TV show in the San Francisco Bay area that focuses on game analysis.) Harry wanted to know why they didn't ask her back.

"I'm just going to be straight up: They hated on me," Vecepia replied. "I got an initial phone call, like everybody. But that's all I heard from them. I don't know what the deal was. Some people said I was not memorable enough for them. Who knows?"

Vecepia addressed the idea that she did not have enough "attitude," referring to a column by Teresa Wiltz of The Washington Post, which begins: "If you've ever seen a reality TV show, chances are you've seen her: a perpetually perturbed, tooth-sucking, eye-rolling, finger-wagging harpy, creating confrontations in her wake and perceiving racial slights from the flimsiest of provocations. At the very sight of her, her cast mates tremble in fear. And no wonder. She's the Sista With an Attitude."

Said Vecepia, "Why do our sistas have to have attitude? Not everybody has to have an attitude. You can be nice. They didn't want any spirituality out there, especially with 'The Passion of the Christ' coming out."

Harry asked Dalton who in this game he thinks is playing well.

Dalton added that he does not think that particular alliance will backfire on Boston Rob, "because he's strong. He's been out there before. He knows the game really well. They prefer to keep a strong person around right now, and maybe get rid of Amber to break the alliance as opposed getting rid of him."

In Entertainment Weekly, Dalton has written that "All-Stars" could be the best "Survivor" ever. But he said Thursday that "the jury is still out… People were expecting twist after twist, and (host) Jeff Probst said the biggest way to shock is not twist. It's going to get real personal. These are friends. It could get dirty and ugly. That's what we're hoping."

Dalton also said he thinks that Rupert dodged a bullet for building a shelter that was basically a hole in the sand.

"If they had been up at tribal council that week, he would have been in trouble, because that was the biggest bonehead maneuver we've seen in a long time," he added.

Vecepia disagreed: "I think they would have kept him…because he's very strong and they're trying to win challenges."

Also, Rupert is providing fish to the tribe.

Dalton pointed out, "If you can give yourselves a few days after your last mistake, someone else will do something stupid."

Both Vecepia and Dalton find Richard Hatch entertaining – and pointed out that he, too, is a provider of food for his tribe.

As for those who are not playing as well as they might, Dalton mentioned Rob Cesternino, who got booted last week, saying he "obviously never got in the mix at all." He also mentioned Sue Hawk: "She's completely off to the side from this tribe. She's a hard worker, that will help her. She's physical and strong but doesn't seem to join the tribe well."

Vecepia said she is wondering why Kathy Vavrick O'Brien is being so quiet. "Maybe… she'll bust out later."

Harry ended the discussion by asking Vecepia to show a photo of her 10-month-old son, Jordan.

"Survivor: All-Stars" airs tonight at 8 p.m. ET, 7 p.m. Central, on CBS. And as always, the latest survivor sent packing will be a guest Friday morning on The Early Show.