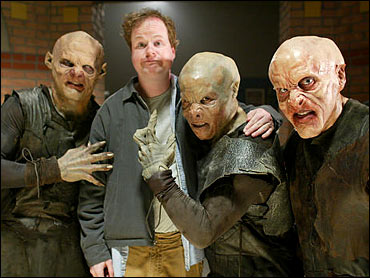 Apocalypse? Like, that is so 1997. "Buffy the Vampire Slayer" has thwarted the end of the world so many times since then, it's no longer cool.

The comedy-horror series, about a petite young woman with a penchant for Valley Girl-speech and the supernatural power to karate-kick demons back into the netherworld, will finally rest in peace.

The finale (8 p.m. EDT Tuesday on UPN) pitted Buffy against a shape-shifting evil known as The First. Some lived, some died, evil was foiled once more, but then again ... this is the end, right? And Buffy has died before — twice.

Although it was her decision to leave, star Sarah Michelle Gellar said it was hard to say goodbye to the role that made her famous.

"The whole time I kept thinking, 'When am I going to cry?'" she recalled about filming her last scene in the desert outside Los Angeles. "I remember when it finally came it was like getting hit with a brick wall."

Series creator Joss Whedon developed the show from his script for a 1992 movie that starred Kristy Swanson as the perky vampire hunter. The idea for a feminist warrior came to him in 1987 after witnessing a few too many horror-flick cliches.

"It's an old story, but it's true one," Whedon said in April, during a break on his second-to-last day of directing the finale. "I was watching a bunch of horror movies and there was the petite ditzy blonde who got cornered in the alley and killed, and I got tired of it. I felt sorry for her and wanted her to have a champion."

The "Buffy" series became a surprise hit for the WB network when it debuted midseason in 1997 with Gellar, then 18, wielding the wooden stakes. The show jumped to the UPN network two years ago. UPN and CBS are both owned by Viacom.

Set in the fictional California town of Sunnydale, "Buffy" depicted high school as a literal Hell: the building sat over a gateway to the satanic inferno, attracting monsters like truckers to a highway rest stop.

Far from being the popular girl in school, Buffy's mysterious night-prowling made her seem like a weirdo to classmates.

Her only friends were the wallflower Willow (Alyson Hannigan), who eventually discoverd her lesbian sexuality; the handsome geek Xander (Nicholas Brendon), and the tweed-jacketed British librarian Giles (Anthony Stewart Head), who doubled as her Watcher, an occult-researcher and fight trainer.

Head said he and Whedon still plan to do a TV movie called "Ripper" based on his character's past as a demon conjurer, although neither is sure when that will happen.

Buffy's romances with the bad-boy bloodsucker Spike (James Marsters) and Angel (David Boreanaz), the vampire cursed with a soul to make him regret his monstrous past, were explorations of how otherwise smart, strong women become embroiled in bad relationships, Whedon said.

When Buffy and Angel made love in the second season, that moment of "perfect happiness" released his curse, eradicated his soul and turned him evil again. "That's the ultimate metaphor," Gellar said. "You sleep with a guy and he turns bad on you."

Her tangles with Spike ventured into abusive territory, according to Marsters, who said the finale may help reconcile his character's light and dark sides. "It's at least the chance to show that he cares to try to redeem himself. I don't know if you CAN redeem yourself after doing what he did all of those hundreds of years," Marsters said.

Over the years, Buffy has encountered a song-and-dance demon in the musical episode "Once More With Feeling," and ghostly voice-stealers in the acclaimed silent installment "Hush."

One demon even became a show regular: Anya (Emma Caulfield) was a ghoul who specializes in punishing unfaithful men — until she lost her power, became human and swooned for Xander only to be dumped by him on their wedding day.

In the fifth season, Buffy was implanted with the memory that she has a little sister, Dawn (Michelle Trachtenberg,) who was created by magical monks to house a mystical ball of energy that opened the world to evil gods and ... well, the show was full of breathlessly complex lore like that.

Comedy has been key to humanizing gothic cataclysms. One example: Buffy locked in battle with the vampire archvillain, The Master, looks curiously at his menacing, bloodstained lips and observes: "You have fruit-punch mouth."

While rumors abounded about discord between Gellar and others on the show over her decision to leave, Whedon said he had long planned this season as the last.

When Gellar made her announcement in a March issue of Entertainment Weekly, she said there was still the possibility that "Buffy" could continue without her under a new title. That plan was eventually scrapped, and if there were hard feelings about Gellar's public resignation most of her co-stars now agree it's time to move on.

"I'm happy. It's a good time for it to end. It's going to be sad, but it would be sad no matter what," said Hannigan, who met her fiance, Alexis Denisof, on "Buffy" when he costarred as a fussy Watcher overseeing Giles. Denisof currently stars with Boreanaz on the WB's "Angel" spin-off, which Marsters will join next season.

Now the phony graveyard in the "Buffy" studio parking lot has been plowed under, the ornate goat-faced seal to the Hellmouth has been rolled away, and the last slain vampire has been dusted by the special-effects department.

Whedon said in coming years he'd like to make a "Buffy" movie, although Gellar said she's not interested — at least for now.

"Never say never," she added — proof that nothing in the Buffy realm is ever dead for sure.