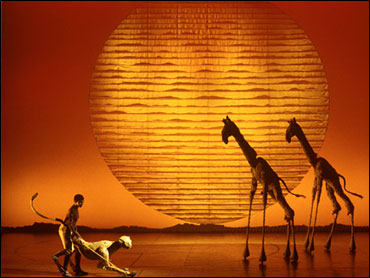 Eleven-year-old actress Shannon Tavarez should have been belting out songs in her starring role as Nala in Broadway's "The Lion King."

Instead, the 78-pound actress lay curled on a hospital bed as a doctor injected her spine with her first dose of chemotherapy.

Earlier that day in April, her doctor had first said, "leukemia." That was when the young star's big acting dreams were overtaken by a bigger one: survival.

Her search is especially daunting because her mother is African-American and her father is Hispanic, from the Dominican Republic. For bone marrow transplants, minorities and those of mixed ancestry have a more difficult time finding good matches there aren't as many people from those groups signed up as potential donors.

The majority of successful matches are between people with the same ethnic background, says Kelly Taylor, donor recruitment coordinator for the bone marrow registry DKMS. The genetic makeups of donor and patient need to be extremely similar for a successful transplant, Taylor says. "Even with 13 million people on the registry, the chance of finding a match is only 4 out of 10," Taylor says. "That number goes way down if you're a minority."

Wolfe, Shannon's doctor, said a partial match has been found for her but a better one is being sought to help avoid complications. But first, he said, doctors are awaiting the results of a recent test that will decide whether she needs another round of chemo, which would put off any transplant for months.

The cast and crew of "The Lion King'' are coming together for Shannon at the Minskoff Theater on Friday to hold a donor registration drive, letting people know that getting on the donor registry involves just a simple cheek swab. Shannon's Broadway friends from "Wicked'' and other shows will attend.

Shannon beat out hundreds of other hopefuls last year to earn her spot playing Nala, the girlfriend of the main "Lion King'' character, Simba. For six months, she performed four shows a week, rushing to the theater after school each day. Alvin Crawford, who acts in the ensemble, says Shannon was energetic until she became mysteriously ill with back aches, a runny nose and pasty skin.

"She was such a brave, young soul," he said. "She would conserve her energy in order to do the show. At the places call, moments before the opening, everyone would be talking, but she would be in the corner without saying anything so she could put all her energy into her performance."

Her general physician first thought it was a cold, says her mother, Odiney Brown. But she didn't get better, and she went to see other doctors. A blood test showed she had acute myeloid leukemia, an aggressive cancer that afflicts mostly adults.

Shannon told The Associated Press she was "devastated to have to leave the show."

After a hospitalization due to an infection, Shannon was back home in Queens last week. She limped across the room, hospital tags dangling, and sank into the couch, visibly tired. But she immediately brightened when she began to talk about acting.

"It's an indescribable feeling, being on stage," she said. "I portray this character with fears, but who is so tough. I feel like that's who I am."

The chemo has taken her long, curly brown hair, but she says the most difficult part has been being away from acting and her friends. The precocious soon-to-be sixth-grader says she longs to get back to the routine of grabbing a chai before drama class and watching tourists gawking around Times Square on her way to work. "Now," her mother says, "she's pretty much in the house or in the hospital."

Minority and multiple-ancestry patients who need marrow transplants often are pitted against paralyzing odds in their races to find matches. In May, doctors found a partial match for 4-year-old Devan Tatlow in Washington after his parents campaigned to sign up donors around the country. They are still seeking a perfect match for Devan, who is Indian and Caucasian, against odds of 200,000 to 1.

Earlier this month, the adoptive mother of 16-year-old Katie Cramer traveled to the teen's native city, Liuzhou, China, to try to find a match for her as time ticked down. Katie is still waiting for a match.

Shannon's mother, too, has been working hard to get as many people as she can to sign up for the registry. She partnered with DKMS on Sunday to hold a midtown Manhattan donor drive, which brought out nearly 400 people. One man drove from Virginia after he read about Shannon in news reports.

But Shannon's mother, who was the DKMS representative at the drive, says it will be weeks before they know if there were any matches.
AP: