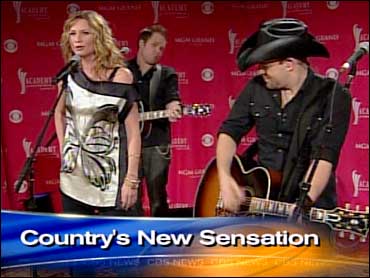 A founder of the country band Sugarland is suing the two current members of the popular group for $1.5 million.

According to a lawsuit filed late last month in U.S. District Court in Atlanta, Kristen Hall was to get a cut of the group's profits even after she left in 2005 for a solo career. The lawsuit says Hall, who founded the band in 2002, has an agreement with Jennifer Nettles and Kristian Bush to equally share profits and losses.

Hall says in the lawsuit that she has been excluded from the group's profits since she left. The band's album, "Love on the Inside," released last month, is No. 1 on Billboard music charts.

A spokeswoman for Bernie Mac says the actor is responding well to treatment for pneumonia and hopes to be released from a Chicago hospital in the next few weeks.

Publicist Danica Smith said Thursday in a statement that Mac's condition is "stable." Smith first announced on August 1st that Mac was hospitalized.

Smith has said the pneumonia isn't related to an inflammatory lung disease Mac also has. That condition has been in remission since 2005.

The Chicago native made waves last month with off-color jokes during a fundraiser for Democratic presidential candidate Barack Obama. The comedian starred in the critically acclaimed Fox television series "The Bernie Mac Show." His film credits include roles in the "Ocean's Eleven" franchise.

Grammy-winning singer Mary J. Blige has been sued in New York for $2 million by a company that says she stole some of the music she used on her latest hit album and in an iPod commercial.

The Drama Family Entertainment company filed the lawsuit in federal court in Manhattan on Tuesday.

The lawsuit claims the company suffered copyright infringement because the singer's "Growing Pains" album contains the song "Work That." The suit says the song was created by a producer who worked for the company at the time.

The song was featured with a silhouetted Blige in an iPod commercial. But iPod maker Apple Inc. isn't named in the lawsuit.

Acid-tongued fashion critic Mr. Blackwell regained consciousness in a hospital Thursday as he battled a serious infection, his publicist said.

Richard Blackwell, 85, collapsed at his home and was unconscious when he was brought to the hospital on Tuesday, publicist Harlan Boll said.

Blackwell was given antibiotics to treat the unspecified infection, Boll said.

"He appears to be cognizant of his surrounding and acknowledged his partner, Spencer," Boll said.

Blackwell was a noted fashion designer in the 1950s and 1960s who dressed the likes of Jane Russell and Dorothy Lamour.

However, he is best-known for his annual list of worst-dressed women. First issued in 1960, it has skewered the style sense of Hollywood celebrities, politicians and other celebs with tongue-in-cheek cruelty.

A long-running lawsuit filed by Tim Burton's ex-girlfriend over his assets should be dismissed, an appeals court has ruled.

The California Court of Appeals issued a ruling on Wednesday ordering a lower court judge to grant a motion by Burton's attorneys for a summary judgment.

The move halts a trial scheduled for next week that would have focused on the couple's nearly decade-long relationship, which ended in 2001.

Burton's longtime girlfriend, Lisa Marie, sued the director in 2006. She claimed that she was cheated out of money that Burton had promised her during their relationship.

Burton countered in court documents that he paid Marie $5.5 million. Marie signed an agreement waiving her rights to his future assets and should have to return the millions if she did not want to abide by the contract, Burton's attorneys argued.

Marie countered in court filings that she felt coerced to sign the contract and that Burton promised to take care of her "financial support and needs for the rest of her life."

Burton met Helena Bonham Carter, whom he is currently dating, while filming "Planet of the Apes." The couple have two children.