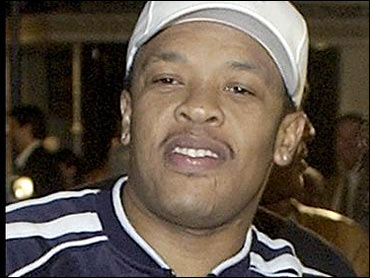 "Dr. Dre is mourning the loss of his son Andre Young Jr.," publicist Lori Earl said in a statement.

Young Jr., who was named after his father, was found dead Saturday by his mother at their home in suburban Woodland Hills, county coroner's Lt. John Kades said.

An autopsy was performed Monday, but the cause of death wasn't likely to be determined for eight weeks while toxicology tests are done, Kades said.

Kenny Rogers is proud of his 50-year career, but he can't help but hope that the best is yet to come.

"For me, the whole goal is to stay relevant as long as I can," said Rogers, whose career retrospective, "Kenny Rogers: 50 Years," came out Tuesday exclusively through Cracker Barrel restaurants.

While the 12-track CD includes hits such as "Lucille" and "The Gambler," it also features three new songs.

He's now working on material for a new album.

Marty Stuart thinks there's room on TV for the style of country music he remembers from "The Porter Wagoner Show," "Flatt & Scruggs" and, of course, "Hee Haw."

So Stuart decided to create his own TV show. "The Marty Stuart Show" will begin airing this November on Sunday nights on the RFD-TV cable network.

Each episode will feature music by Stuart and his Fabulous Superlatives, as well as his wife, Grand Ole Opry star Connie Smith, and special guests.

Stuart will host and produce the 30-minute episodes. Grand Ole Opry announcer Eddie Stubbs will be his sidekick.

Formed in Los Angeles in 1969, Little Feat blended rock with country, blues, jazz and other musical styles. Some of their better-known songs include "Fat Man in the Bathtub," "Sailin' Shoes" and "Oh Atlanta."

The group disbanded when frontman Lowell George died in 1979, but they later re-formed and continue to record and tour. For the new disc, they rerecorded their classics with special guests like Gill.

Others performing on the album include Bela Fleck, Sonny Landreth, Sam Bush and Chris Robinson of the Black Crowes.

Let's see Hari Puttar get out of this one.

Bollywood producers set to release a film called "Hari Puttar: A Comedy of Terrors" are working to fend off a lawsuit filed by Warner Bros. that claims the movie title hews too closely to their mega-famous boy wizard franchise.

While Bollywood films often borrow liberally from Western movies, producers of "Hari Puttar: A Comedy of Terrors" say their movie bears no resemblance to any film in the "Harry Potter" series.

"There is absolutely nothing to link 'Hari Puttar' with 'Harry Potter,"' said Munish Purii, chief executive officer of Mumbai-based producer Mirchi Movies. Hari is a common name in India and "puttar" is Punabji for son, he said.

The film is not a tale of wizard spells or flying broomsticks, but rather a story of an Indian boy left home alone, who fights off burglars when his parents go away on vacation - a plot more reminiscent of the film "Home Alone," starring Macaulay Culkin.

Warner Bros. is seeking an injunction against the film, which is set for release Sept. 12. Hearings began Monday and the next is scheduled for Sept. 2.

Dave Freeman, co-author of "100 Things to Do Before You Die," a travel guide and ode to odd adventures that inspired readers and imitators, has died. He was 47.

Freeman died Aug. 17 after falling at his Venice home and hitting his head, his father, Roy Freeman, told the Los Angeles Times on Monday.

An advertising agency executive, Freeman co-wrote the 1999 book, which was subtitled "Travel Events You Just Can't Miss," with Neil Teplica. It was based on the Web site whatsgoingon.com, which the pair ran together from 1996 to 2001.

Freeman's relatives said he visited about half the places on his list before he died, and either he or Teplica had been to nearly all of them.

The book's recommendations ranged from the obvious - attending the Academy Awards ceremony and running with the bulls in Pamplona, Spain - to the more obscure - taking a voodoo pilgrimage in Haiti and "land diving" on the Island of Vanuatu, which Freeman once called "the original bungee jumping."

Hollywood has been mining Asian movies for ideas for years - but now an American studio is remaking one of its home productions as a Chinese-language movie with local partners.

"Cellular" is about a kidnapped woman who makes a call to a random mobile phone seeking help.

While Hollywood has remade Asian movies for years - Martin Scorsese's "The Departed," the horror films "The Ring" and "The Grudge" are based on Asian movies - "Connected" is billed as the first Chinese remake of a Hollywood movie.