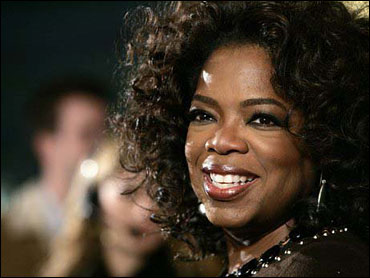 Gold medalists Michael Phelps, Nastia Liukin and Kobe Bryant, along with 150 other U.S. Olympic team members, will be on the season premiere of "The Oprah Winfrey Show."

Winfrey plans to tape the show at Chicago's Millennium Park on Wednesday.

Harpo Productions says Winfrey intends the show as a "welcome home celebration" and a chance to showcase Chicago as the city bids for the 2016 Summer Olympics.

Barack Obama's acceptance speech at the Democratic National Convention was seen by more than 38 million people.

His TV audience nearly doubled the amount of people who watched John Kerry accept the Democratic nomination to run against President George W. Bush four years ago. Kerry's speech was seen by just over 20 million people.

Obama's audience might be higher, since Nielsen didn't have an estimate for how many people watched Obama on the stations, PBS or C-SPAN.

Yearwood Looks On Bright Side After Emergency Landing

Trisha Yearwood had a harrowing experience on a recent flight to Oklahoma when her plane was forced to make an emergency landing in Baltimore because of a cracked windshield.

The singer was shaken but undeterred; she caught another flight home a few hours later.

"I'm pretty spiritual about it," she said Wednesday. "I turn it over to God and think, 'There's nothing I can do about it.' And I also think, 'What are the odds?' I've been flying for 18 years and had one emergency landing. That's pretty good."

Yearwood, her sister and some friends were returning Aug. 18 from a three-day, 60-mile walk in Boston to benefit Susan G. Komen for the Cure breast cancer research fund when they heard a loud pop.

Yearwood, 43, said the front left window of the plane had cracked.

"We never lost cabin pressure, so we didn't have to use our oxygen masks. By the time we got on the ground, the crack on the front of the plane's window was huge, and getting bigger by the second," she said.

When they reached the ground, she recalled, "It was like in the movies when they land and you see all the fire trucks and emergency crews. That's a real experience."

After a three-hour wait for another plane - and a "fantastic" seafood dinner on the city's Inner Harbor - they were back in the air.

"I didn't have any anxiety like 'the last thing I want to do is get back on an airplane.' I did feel like the pilots and the flight attendants handled it perfectly," Yearwood said. "They were so very calm. It wasn't a scary situation until afterward when you think about what possibly could have happened."

Indiana Sen. Evan Bayh joked about politics and football as he made his first appearance on "The Daily Show with Jon Stewart."

The Democrat said presidential nominee Barack Obama is "the real deal" and told an incredulous Stewart that Indiana really could be in play for the Democrats in the November election.

Bayh got boos from the Comedy Central audience in Denver when he mentioned the Indianapolis Colts.

Bayh is not done appearing on comedy shows. His office says Bayh will make a brief appearance Friday on HBO's "Real Time" and on ABC's "Jimmy Kimmel Live."