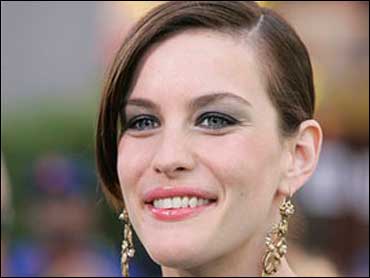 The iconic Gap advertising campaigns got some new blood recently as movie star Liv Tyler and up and coming starlet Ginnifer Goodwin became the new faces for the company's Fall collection.

With Tyler, the campaign marks more than a new work opportunity for her, it's also the unveiling of her new, much shorter, haircut.

Tyler had been looking forward to changing her style, but had been unable to do so because of her film commitments.

"I've been stuck to the look I have in the movie and I was supposed to maybe do some re-shoots or pickups, so I had to wait for like six months," says Tyler. "I had had this when I was six and I've always wanted to do it again. So, I just thought 'I'm ready for a change.'"

Gap's Fall collection is all about classic items redesigned for today.

Tyler and Goodwin, in a series of black and white stills shot by acclaimed fashion photographer Mikael Jansson, lend a unique glamour to the classic pieces.

Tyler, in a throwback haircut to her childhood, brings a classic style all her own.

The Marin County property of Oscar-winning actor Sean Penn and his wife, actress Robin Wright Penn, is up for sale for $15 million.

The couple purchased the 2.2-acre property in 1996 for $2.1 million and spent more than two years redoing the 1933 Spanish-style estate.

The couple married in 1996 and have two children. They filed for divorce in December, then had proceedings dismissed in April.

It's a charity softball game that started with the likes of Jackson Pollock and Willem de Kooning rounding the bases in sculptor Wilfrid Zogbaum's front yard.

This Saturday, the annual Artists & Writers Charity Softball Game celebrates its 60th year in East Hampton on Long Island, despite some erosion in the definition of "artists and writers."

Celebrities including actors Chevy Chase, Lori Singer and Mercedes Ruehl will take their swings at a local park, along with author Richard Reeves, journalists Mike Lupica and Jeffrey Lyons, and publishing and real estate magnate Mort Zuckerman, among others.

Participants are expected to remember "Jaws" actor Roy Scheider, who pitched many years for the artists. He died in February.

Kid Rock To Play "All Summer Long" At VMAs

Kid Rock is returning to the Video Music Awards for another hit performance - and this time it doesn't involve a fistfight with Tommy Lee.

The boisterous Detroit-area rocker is slated to perform "All Summer Long" off his platinum-selling CD "Rock 'N Roll Jesus."

Though it was released nearly a year ago, it has surged on the charts and is currently one of the top five selling CDs.

Last year, Kid Rock wasn't a performer, but he was involved in one of the ceremony's most talked about moments when scuffled with Tommy Lee while they were sitting in the audience. Both were at one time married to Pamela Anderson, who was also in attendance.

The fight was not shown on camera, but provided fodder for jokes from the likes of Diddy and Jamie Foxx.

Rock is the third act confirmed for the VMA's, to be held Sept. 7 in Los Angeles. Other performers are Lil Wayne and Jonas Brothers, though there is a possibility that Britney Spears - who's bleary kickoff performance at last year's VMA's became one of 2007's most talked about moments - may join them.

MTV told The Associated Press earlier this week they are in negotiations to have the star there in some capacity, and she's already taped two promotional ads for the show with host Russell Brand.