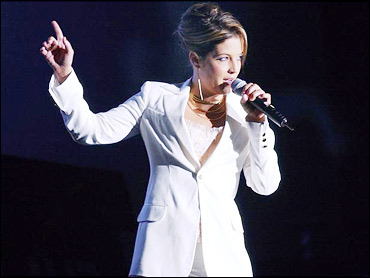 The babies are expected to arrive in the fall.

Presley-daughter of Elvis Presley and actress Priscilla Presley-announced her pregnancy on her MySpace page in March, saying she was forced to go public with the news after photos of her looking heavier were ridiculed in the media.

The 40-year-old singer has two children from her marriage to musician Danny Keough, which ended in 1994. She was briefly married to Michael Jackson and Nicolas Cage.

"It's her time to celebrate with her husband," Priscilla Presley said Tuesday in an interview with "Entertainment Tonight." "My daughter is a very family girl. She loves children, and I know that she and Michael have been hoping for this for a long time."

She said twins run in the family "on Elvis' side and on my side too. I have twin brothers, and then, of course, Elvis had a twin brother" who died at birth.

A judge has dismissed allegations against Bob Barker in a wrongful termination lawsuit filed by a "Price is Right" employee, saying the game-show's longtime host was not her boss.

Los Angeles Superior Court Judge Malcolm H. Mackey tentatively dismissed several claims against Barker on Wednesday, saying he could not be sued for wrongful termination because he was not her employer.

Curling's attorney, Nick Alden, can amend the complaint to try to prove that Barker inflicted emotional distress, but Mackey dismissed that allegation for now.

Mackey also dismissed several claims lodged by Curling against FremantleMedia, but will allow Alden another chance to argue they should be included.

Curling's suit claimed she was in a "pleasant working environment" during most of the 24 years at "The Price is Right." She claimed she was demoted after testifying against Barker in a wrongful termination suit filed by one of the show's former production assistants.

She had been seeking unspecified damages.

Neither Curling nor Barker was in court Thursday.

One could only imagine the pickin' party they could have thrown on the back lot of Toby Keith's new movie, "Beer for My Horses."

Keith, Willie Nelson, Ted Nugent, Mel Tillis, David Allan Coe and Rodney Carrington are all in the film, a comedy that the 47-year-old singer describes as a tip of the hat to Burt Reynolds' "Smokey and the Bandit" movies and "The Andy Griffith Show."

But it wasn't to be. Keith says they didn't have time to pick up one guitar because they were shooting 12 hours a day.

"Beer for My Horses," which Keith co-wrote with Carrington and also produced and starred in, opens Friday.

The title comes from Keith's 2003 hit duet with Nelson, a salute to frontier justice that captures the spirit of the movie.

A California man identified as an employee of the company that makes the "Girls Gone Wild" video series has been arrested on charges he groped a woman aboard a bus parked outside a New York bar.

Police say 37-year-old Matthew Sullivan of Los Angeles was charged early Wednesday with first-degree criminal sexual act. Prosecutors said it was not immediately known if he was represented by an attorney.

"Girls Gone Wild" held an event at Nubar in Smithtown, N.Y. on Tuesday night. Afterward, the 20-year-old told police she was invited onto the bus and subjected to "unwanted sexual contact."

A call to the Girls Gone Wild offices in Los Angeles seeking comment was not immediately returned. There was no answer at a number listed for Nubar.

"Yo, what up. This Big Snoop Dogg. Represent the Punjabi. Aye ya, Hit em with this," the rapper says while introducing the title song to "Singh is Kinng," the Bollywood film that opens Friday.

Clad in a maroon slim-fitted Indian kurta and beige trousers and a diamond-studded turban, Snoop Dogg lounges on an oversized armchair draped with blue and pink silk alongside Akshay Kumar, the movie's lead star, in a video posted on the Internet by the producers, Cashmere Asia.

"I'm just a king sitting on my throne all alone," Snoop Dogg raps, surrounded by energetic dancers in colorful headgear in a song peppered with rhythmic drum beats. "Singh is King. Singh is King. Snoop Dogg is also the King."

The video was shot over three days last month in Chicago.

The film's producers said this was more than a blending of cultures and would pave the way for more collaborations and international brand advertising through Bollywood.

The title song has already taken India by storm, and can be heard blaring repeatedly from radios and at bars.

Snoop Dogg said he would follow up his success with a tour to India.

"Snoop Dogg has a lot of fans in India and I love 'em right back," he said. "Get ready for me."

Wahlberg To Make Cameo On "Entourage"

Fall is full for Mark Wahlberg.

The 37-year-old actor-producer has upcoming productions in film, television and his own family.

Wahlberg will make a rare cameo appearance on "Entourage," the hit HBO series he executive produces, when the fifth season begins next month. And his third child with fiancée Rhea Durham is due in September.

In October, Wahlberg returns to his action-star roots with "Max Payne," a crime-thriller based on a gritty video game. Meanwhile, he'll start training for his role in "The Fighter," playing boxer "Irish" Mickey Ward.

He followed up his Oscar-nominated performance in "The Departed" with a pair of gun-toting parts, plus softer roles in M. Night Shyamalan's "The Happening" and Peter Jackson's anticipated interpretation of the best-seller "The Lovely Bones," due out next year. But "Max Payne" spoke directly to Wahlberg's "guy mentality," he said.

Wahlberg turned to television to engage his playful side.

"I did one other cameo in the 'Entourage' pilot but I didn't get to do a scene with Jeremy Piven," Wahlberg said. "This time it's me and Piven going at it, so it was fun."

Despite his crammed calendar, Wahlberg did make time to take in a few summer superhero flicks, including "The Dark Knight" and "Iron Man."

And he'd love to see a real-life movie version of "Aquaman," which appeared in fictional form on "Entourage."

"People automatically assumed that I was going to really make that movie," Wahlberg said. "My agent was even crazy enough to try to get Jim Cameron to direct it."

Hollywood star Leonardo DiCaprio's grandmother has died in her hometown of Oer-Erkenschwick in Germany at age 93.

Town spokesman Peter Raudszus says Helene Indenbirken died Monday in a hospital in nearby Recklinghausen. He did not give further details and said Wednesday that the family asked for the funeral details to be kept private.

Indenbirken was born in Oer-Erkenschwick but immigrated to the United States - only returning to the western German town in 1983. Her daughter, Irmeline, is DiCaprio's mother.

The actor visited her regularly as a youth and continued to swing by after becoming a superstar. He even took Indenbirken to the German premiere of his 2004 film "The Aviator" in Berlin proudly telling the fans outside: "My Grandmother!"

Actor Wesley Snipes must reimburse the government in prosecution costs for his tax conviction.

According to court documents, U.S. District Court Judge William Terrell Hodges ruled last week the action film star must reimburse the government about $217,000. Snipes, star of the "Blade" trilogy and "White Men Can't Jump" among other movies, had objected to the cost.

A message left with Snipes' attorney was not immediately returned Tuesday.

A jury convicted Snipes in February of three counts of willfully failing to file his income taxes. He has appealed the convictions and his three-year prison sentence.

A rental truck containing Iggy Pop and the Stooges' equipment has been recovered empty after being stolen in Montreal.

Stooges road manager Eric Fischer says the 15-foot truck stolen Monday contained all the group's instruments and stage gear. He tells the Detroit Free Press the lost items are worth tens of thousands of dollars.

Police say the truck was found empty Tuesday several blocks from the hotel where it was stolen.

The Stooges are in the middle of a tour with stops in Belgium, Britain, Canada, the Czech Republic, Finland, France, Germany, Ireland, Italy, Norway, Russia, Serbia, Spain and the United States.