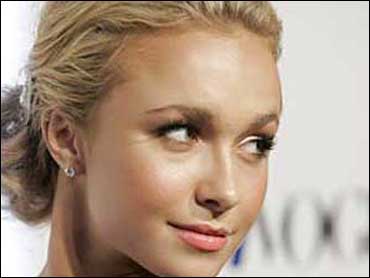 The father of "Heroes" star Hayden Panettiere was arrested early Monday on suspicion of hitting his wife, authorities said.

Whitmore declined to name the woman that Panettiere is accused of hitting, but said she reported to deputies that he struck the woman three times with an open hand.

Whitmore said detectives would not release a mug shot of Panettiere.

Los Angeles court records do not indicate any prior charges for the 49-year-old father of Hayden Panettiere, who plays Claire Bennett on NBC's hit show, "Heroes."

A phone message left with Hayden Panettiere's publicist was not immediately returned Monday.

"Hee Haw," the cornpone comedy show that aired on television for 28 years, is coming back with reruns on the RFD-TV cable channel.

The one-hour show, with performances by country music stars, will air at 8 p.m. Eastern time each Sunday beginning Sept. 7 on RFD, which bills itself as "rural America's most important network."

"Hee Haw" was on the air somewhere for 28 years - almost continuously between 1969 and 1997, first on CBS for two years, then in syndication until 1993 and finally on the old Nashville Network cable station.

Country performers Roy Clark and Buck Owens were co-hosts, Clark for the entire run and Owens for 17 seasons.

RFD, with production facilities in Nashville, has been on the air since December 2000 and is available in 35 million homes.

The "King" Of All Barbies?

The maker of Barbie is coming out with the first-ever Elvis and Priscilla Presley dolls.

The dolls are wearing replica outfits of what the Presleys wore on their wedding day in Las Vegas in 1967.

The Elvis doll is dressed in a black paisley print tuxedo with boutonniere and black boots. Priscilla's doll is wearing a gown of white chiffon and satin, with tiara and veil.

Mattel's Elvis and Priscilla Barbie Doll Gift Set is on sale at shopelvis.com and Wal-Mart stores.

This Saturday marks 31 years since Presley died at Graceland.