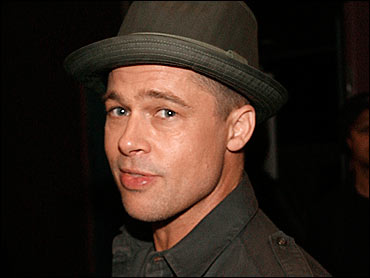 Inevitably, a news conference Wednesday promoting their new Coen brothers film, "Burn After Reading," turned to the birth of Pitt's twins with partner Angelina Jolie, and whether his good friend would ever settle down.

Clooney, 47, put on a look of mock bemusement.

"I am so surprised to hear that question. That is honestly the first time I have been asked that," Clooney said. "I am getting married and having a child today."

Pitt, 44, whose brood has grown to six children with the birth of twins Knox Leon and Vivienne Marcheline last month, offered to share his children with Clooney, adding deadpan: "I'll have two more by next year."

The movie, which premieres Wednesday at the Venice Film Festival, is a tale about idiots - and what happens when their worlds collide.

Disappointed Neil Diamond fans will get a refund after attending a concert at Ohio State University in which the 67-year-old singer's voice sounded raspy.

Some fans left the Monday concert early and others said Diamond completed the concert without mentioning anything to the audience about his voice.

A statement from Diamond, the singer of such hits as "Sweet Caroline" and "Song Sung Blue," on Tuesday says a doctor has diagnosed acute laryngitis.

Will Australia Give Snoop Dogg The Green Light For A Visa?

The immigration department said Wednesday it was conducting a character assessment of Snoop Dogg, including his criminal history, as Australia considers whether to grant the rapper a visa for a concert tour later this year.

A department spokesman said reports the visa had already been granted were false.

He said the rapper, whose birth name is Cordozar Calvin Broadus Jr., applied for a visa in July and the department carried out a preliminary assessment. Snoop Dogg and fellow hip-hop star Ice Cube plan an Australian concert tour in October.

The spokesman said the rapper has visited Australia three times: in 1998, 2006 and 2007, without incident, though he did overstay his visa by two days on the last visit.

Snoop Dogg withdrew his application for a visa to Australia last year when he failed to pass the character requirements after pleading no contest to gun and drug charges in the United States.

John Legent, who performed his new song, "If You're Out There" for delegates, was the most visible of the entertainers who flowed into Denver for the Democratic National Convention.

A choir backed him for the song that fits neatly with Barack Obama's campaign themes.

Among other celebrities spotted on the first day of the convention on Monday:

- Danny Glover, wearing a jacket over a Martin Luther King Jr. shirt, who talked about unions at a Creative Coalition event.

- Kal Penn of the "Harold & Kumar" movies and the TV series "House," who worked for a good part of the day as a "delegate whip."

- Cyndi Lauper was interviewed on the convention floor.

- Spike Lee arrived at the VIP section of the Pepsi Center just before the first-night prime-time convention slot.

- Robert Randolph & The Family Band and The Fray performed for convention-goers.

- "American Idol" alum Chris Daughtry was in the audience at a Rock the Vote concert at the city's opera house, which featured Jakob Dylan, NERD and Fall Out Boy.

Ralph Young, half of the Sandler and Young singing duo and a legend of the big band era, died Friday. He was 90.

He died at his home in Palm Springs after a brief illness, his wife said.

Young, who was born in the New York City borough of the Bronx in 1918, sang with Les Brown's Band of Reknown and formed his own band when he served stateside in the Army during World War II.

The European charm of the Belgian-born Tony Sandler complemented Young's down-to-earth Bronx humor. Their baritone voices blended well, with Sandler singing songs in their original language while Young sang along with an English translation. Their first album sold more than a million copies.

The pair recorded 22 albums, appeared on "The Ed Sullivan Show" and "The Tonight Show" on television, and headlined concerts at legendary nightclubs in Las Vegas, Los Angeles, New York City and Europe.

Bass, who underwent a heart transplant last year, died at his home in Manhattan of complications from amyloidosis, a rare blood disease, said his publicist, Joshua Marcum.

Bass became music director of the Collegiate Chorale in 1980 and was instrumental in raising its profile with a wide repertoire of choral and operatic works and styles including multimedia productions.

Bass also served as artistic director of the Olga Forrai Foundation, which supports the careers of young singers and conductors, and was a judge for the Metropolitan Opera National Council Auditions.