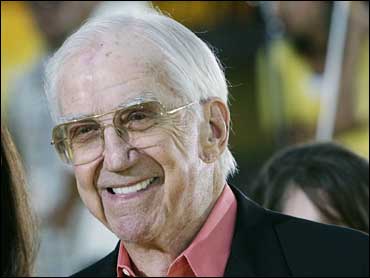 Ed McMahon is on the move.

A spokesman for the former "Tonight Show" sidekick says McMahon has agreed to a deal with a private buyer for his hilltop home.

Bragman says McMahon will move out of the home, which is in the same exclusive neighborhood as Britney Spears, after the sale is complete.

McMahon was facing the prospect of the house being foreclosed on
because he had defaulted on a $4.8 million loan.

It's Another Boy For Gwen Stefani

It's Love, Angel, Music, Baby for Gwen Stefani, who's given birth to her second child, a boy.

Zuma Nesta Rock weighed 8 pounds and 5 ounces when he was born Thursday afternoon, according to publicist Dave Tomberlin.

"Mother, baby and family are all happy and healthy," he said in a statement.

The pop star and fashionista already has one son, Kingston, with her husband, rocker Gavin Rossdale. Rossdale also has a teenage daughter with fashion designer Pearl Lowe.

Last Of The Spice Girls To Become A Mommy

Singer Melanie Chisholm says she is expecting a baby, which will make her the last of the former Spice Girls to become a mother.

The 34-year-old singer known as "Mel C" announced the news Friday on her Web site.

The father is Thomas Starr, her partner for six years.

Among the other Spice Girls, Victoria Beckham has three sons, Melanie "Mel B" Brown has two daughters, Geri Halliwell has one daughter and Emma Bunton has a son.

An actress who appeared on the HBO series "The Wire" has been arrested on minor drug charges.

Court records show Felicia "Snoop" Pearson, who played a killer of the same name on the television series, was charged after police went to her home in northeast Baltimore to pick her up for refusing to cooperate as a witness in a murder trial.

She was arrested Wednesday after police served a warrant that would allow them to detain her, if needed, until the Sept. 16 trial of Steven Lashley. Court documents say Pearson is accused of having two cigars containing suspected marijuana in a bedroom and loose plant material. She was charged with one count of drug possession.

In "Built to Succeed," Phelps will also cover his philosophy on training and competition, as well as his life being raised by a single mother and coping with an attention-deficit disorder, the publisher said.

The book is scheduled to be released in December.

Phelps, 23, became the winningest Olympian ever at this summer's Beijing Games, winning eight golds to add to six golds from the 2004 Olympics. He holds seven world records.

The film about a Mexican mother and her son won awards for best film, actor, actress, supporting actor and director during a star-studded ceremony Thursday at the Beverly Hills Hilton hotel in Los Angeles.

Established in 1985, the Imagen Awards honor contributions by and about Hispanics in the entertainment industry in 18 categories.

Plana, the 54-year-old Cuban-American actor who appeared in "Three Amigos!" and "An Officer and a Gentleman" before his turn as Betty Suarez's father in "Ugly Betty," was also presented with the Lifetime Achievement Award. The Norman Lear Writer's Award was given to "La Misma Luna" executive producer and screenwriter Ligiah Villalobos.