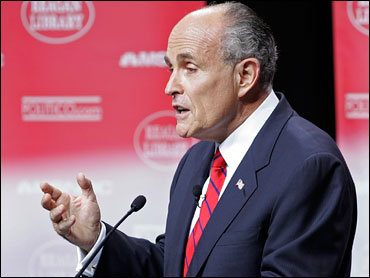 Of all the low points during the Bush administration, perhaps the most surreal was the week in December 2004, when Bernie Kerik was poised to become secretary of Homeland Security. By the traditional measures used to judge qualifications for this sort of job, Kerik was not an ideal candidate. The main points in Kerik's favor were his loyal service to Rudy Giuliani, first as driver for his mayoral campaign, then corrections commissioner, then police commissioner — the last of which was commemorated by the casting of 30 Kerik busts. On the negative side of the ledger were his multiple alleged felonies, including tax evasion and conspiracy to commit wiretapping (currently being investigated by federal prosecutors), and his (also alleged) ties to the DeCavalcante and Gambino crime families.

If a "Sopranos" writer proposed a plotline in which a Kerik-like figure rose through the ranks to become head of the department charged with preventing the next terrorist attack, he would be laughed off the show. So how did it almost happen in real life? The Washington Post recently reconstructed the Kerik nomination: The decisive factor seemed to be that Bush was "lulled by Kerik's swaggering Sept. 11 reputation."

That last sentence is, in many ways, the perfect epigraph for the Bush presidency. The Kerik episode displayed many of the pathologies of modern Republican governance: incompetence, corruption, an obsession with loyalty over traditional qualifications. But it shows with particular clarity Bush's most distinct contribution: the mistaking of macho bluster for strategic acumen.

The error Bush made in judging Kerik is, of course, the same error the country as a whole made in judging Bush. We (or most Americans, anyway) were lulled by the president's swaggering September 11 reputation, by the image of him finding his voice in the rubble of Ground Zero. Of course, it turns out that understanding how to lead the war against terrorism requires more than standing on a pile of rubble and talking tough. A certain level of intellectual depth and curiosity is needed. You not only need to want to kill the bad guys, you need to know which bad guys to kill, and you need to have some kind of plan for what happens after you're left occupying their large, strategically vital, anti-American, ethnically riven failed state.

The war on terrorism, boasts Giuliani, "is something I understand better than anyone else running for president." This would be very scary if it were true. In recent weeks, Giuliani mistakenly said that it was unclear whether North Korea was further along toward a nuclear bomb than Iran, casually lumped together Shia Iran and Sunni al Qaeda, and confessed he didn't know enough about the Bush administration's approach to terrorism detainees to take a position. In fact, Giuliani wasn't even a particularly good terrorism fighter as mayor. A mere six years after the 1993 World Trade Center bombing, he decided to locate the city's emergency headquarters in the World Trade Center itself — the one spot in all New York City he knew had been targeted for attack. He also failed to ensure that police and firefighters could communicate with one another, with disastrous results.

But Giuliani isn't really saying he has the most expertise fighting terrorism. (After all, he has never held office beyond the municipal level.) Rather, he's trying to conjure the glow that Bush himself had in the days after September 11. Bush, his adoring fans used to say, "got it." To "get it" meant you had some metaphysical understanding of the war that transcended — indeed, was largely incompatible with — any actual knowledge. To the extent that "it" meant anything specific, it was the understanding that the war on terrorism was a war, not a police action, requiring land invasions of countries like Iraq. Most conservatives have quietly backed away from this particular vision, but the larger notion that the president must be a swaggering tough guy remains.

So, while Giuliani's boast may be absurd by my standards — he thinks he understands the war on terrorism better than, say, Joe Biden? — by Republican standards, it's simply obvious. Giuliani may not have any expertise as a war leader, but he excels at acting like one.

Now, it's perfectly natural to want a charismatic presidential candidate. The trouble is that Republicans seem to have completely lost sight of the difference between the apparent and the real. The reductio ad absurdum of this trend is the burgeoning candidacy of TV star Fred Thompson, who plays the part of a tough prosecutor and alpha male on "Law & Order."

Robert Novak recently noted, approvingly, that "[s]ophisticated social conservative activists" are flocking to Thompson. "Their appreciation of him," wrote Novak, "stems not from his eight years as a U.S. senator from Tennessee but his actor's role as district attorney of Manhattan on 'Law & Order.'" If this is how sophisticated social conservative activists make their political judgments, I'd hate to see the unsophisticated ones.

Representative Zach Wamp, a Thompson backer, recently said that Thompson is smart to delay his campaign and rely instead on the free publicity of "Law & Order" reruns. "You are able to frame the message, and you are not caught up in all the controversy," he said.

The "message" is Thompson's fictional tough-guy persona. The "controversy" is, well, real life. Thompson's most prominent actual legal experience was, in fact, a disaster. As chairman of the Senate Governmental Affairs Committee in 1997, he dramatically claimed to have found evidence that the Chinese government had bribed the Clinton administration. But, over the course of the hearings, Thompson was able to prove nothing of the sort, and the affair proved a total humiliation.

If Thompson's TV character were a bumbler who brought unfounded charges against innocent people, nobody would be touting him for president. But screwing things up is not an impediment to winning the GOP nomination, as long as it only happens in real life.