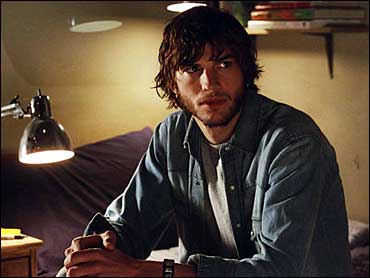 Ashton Kutcher punked the critics as his time-travel thriller "The Butterfly Effect" debuted in the top spot at the weekend box office.

The film hauled in $17.1 million while Ben Stiller's romantic comedy "Along Came Polly" slipped from first to second place with $16.6 million, according to studio estimates released Sunday.

"The Butterfly Effect" stars Kutcher as a college student haunted by repressed childhood memories who travels back in time to inhabit the body of his younger self and undo traumatic events.

Critics derided the film, but moviegoers seemed intrigued by the premise and hungry to see the 25-year-old Kutcher, star of "That '70's Show" and MTV's prank reality show "Punk'd," in more serious fare.

"There was a great curiosity to see how he'd handle a mature role," said David Tuckerman, head of distribution for New Line, which released "The Butterfly Effect." "This is the first time he's had a chance to show his dramatic acting abilities."

The film attracted nearly as many men as women, despite Kutcher's popularity among young female viewers, he added.

Keys To A Fruitful Garden

With the Golden Globes Sunday and the Oscar announcements this week, viewers were expected to follow a seasonal pattern of flocking to light-hearted films in the January run-up to awards season, said Paul Dergarabedian, president of box-office tracker Exhibitor Relations Co.

But intense media coverage of Kutcher's high-profile romance with Demi Moore and other exposure helped buck the trend and draw audiences, Dergarabedian said.

"I don't think anyone expected his film to do quite this much business," he said. "This just proves that Ashton Kutcher's drawing power is quite strong."

Also debuting this weekend was "Win a Date With Tad Hamilton!" which came in at third with $7.5 million. The romantic comedy follows Kate Bosworth as a naive West Virginia girl who wins a date with a movie hunk. It also features Josh Duhamel and Topher Grace, another "That '70s Show" cast member.

The film's gross may have been hindered by "Along Came Polly," which likely fleeced weekend viewers looking for romantic comedies.

"That audience got split up so it wasn't able to do as well," Dergarabedian said.

The Tim Burton's storytelling fantasy "Big Fish" took in $7.3 million to finish at No. 4. "The Lord of the Rings: The Return of the King," fell one place to five to with $6.85 million to bring its total domestic gross to nearly $337 million.

Meanwhile, the Charlize Theron serial-killer drama "Monster" played in only 330 theaters but averaged $6,066 per screen. The film has Academy Award buzz for Theron and earned her a Golden Globe nomination for best actress.

The overall box office was up, as the top 12 film garnered about $83.5 million, compared to nearly $80 million over the same weekend last year. "Darkness Falls," "Kangaroo Jack," and "Chicago" held the top spots a year ago.

Estimated ticket sales for Friday through Sunday at North American theaters, according to studios and Exhibitor Relations Co. Inc. Final figures will be released Monday.