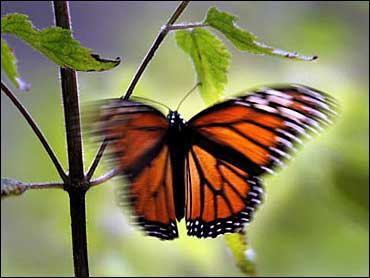 Scientists are marveling at the impressive comeback of Monarch butterflies, which once again are carpeting the fir trees of central Mexico in a sea of orange and black wings — despite a deadly freeze last year that killed hundreds of millions.

Hard rains and biting cold in the central states of Michoacan and Mexico in January 2002 killed 75 percent to 80 percent of the Monarch butterflies that make a 2,000-mile journey from the eastern United States and Canada.

The unprecedented numbers of deaths — some estimated as many as 500 million butterflies perished — followed by drought conditions last summer and decreased levels of butterfly sightings in the United States, prompted concern that fewer numbers of the insects would arrive south of the border this year.

But the butterflies came — en masse. Scientists estimate anywhere from 200 million to more than 500 million monarchs are now hanging in enormous clusters in a 20-acre area of forest.

"That's at least twice what we expected," said Chip Taylor, an entomologist at the University of Kansas and director of Monarch Watch, a network of Monarch butterfly researchers based in Lawrence, Kan.

"It's a little bit of a mystery. ... There's obviously something we really have to learn about where these butterflies come from and how successful they are. ... But it's quite clear that they have recovered."

The annual migration of the butterflies — they come to Mexico in late October and depart in late March — is an aesthetic and scientific wonder that has captivated the imagination of scientists, nature lovers and tourists. Scientists still don't fully understand what guides generations of butterflies to the same place each year. Each migrating group is at least three to five generations removed from the previous arrivals.

The key to the butterflies' comeback this year was the size of the colonies that arrived in Mexico before the killer rains of January 2002, said Lincoln Brower, a professor emeritus of zoology at the University of Florida who has been studying Monarchs for 47 years.

Scientists originally estimated about 100 million butterflies were nesting in and around Mexico's Monarch Butterfly Biosphere Reserve last year. They dramatically increased that estimate after realizing at least twice that many — and perhaps up to five times as many — died. Millions of others survived.

Brower calculates that as many as 650 million butterflies migrated to Mexico during the last migratory season and that as many as 500 million of them died. As many as 150 million survived, moved on and successfully reproduced in Texas, Florida and other parts of the U.S. Gulf coast in the spring, he said.

The offspring of the survivors flew north, creating three to five new generations that scattered throughout the United States east of the Rockies and in Canada.

"The Monarch is an incredibly robust animal," Brower said. "But the problem is, at some point the straw is going to break the camel's back."

Illegal logging in and around the Mexican butterfly reserve — and tree cutting by residents — is not new; it has been happening for decades. What is alarming, Brower and others say, is that it appears to be on the rise — despite years of efforts by government agencies and private organizations to stop it.

A study Brower published last year with colleagues at Mexico's National Autonomous University showed that from 1971 to 1999, 44 percent of the high-quality forests where butterflies hibernate was degraded. The largest patch of forest was reduced from 67,000 acres to 12,350 acres, he said, adding that new data show the rate of degradation is increasing.

Illegal, clandestine loggers — often armed and dangerous — thrive in the area, and some residents continue to take away wood to sell and use in their homes.

"What's going to happen is we're going to lose the migration of the Monarch butterfly in a very few years if this doesn't stop," Brower said. "It's a disaster in the making."

"It's impossible to be everywhere," he said. "The government is doing what it can with the economic resources it has."

Mexican environmentalist Homero Aridjis, who has fought for years to ensure the Monarchs' survival, said while he is discouraged by the continuing destruction, he is heartened by the butterflies' endurance.

"In the middle of all of this misery, all this destruction, so far they have survived," he said.