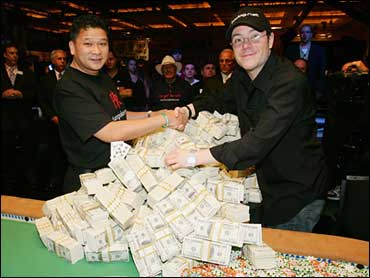 It's been three months since I took the red-eye out of Las Vegas after busting out of the World Series of Poker. I'm ready to tell you what happened. Finally.

Day One got under way at noon on Monday, July 31. I drew table 95, seat number 2. The first hand I actually played was K-8. Two other players had called the big blind bet for 50 chips, so there were 175 in the pot when it was my turn to act. I raised the bet to 325 and everyone folded. I happily added the 175 chips to my stack. The tournaments in which I have done best have been those in which I was able to build my stack slowly all day long, avoiding the big fluctuations that come with playing big pots. So I was not looking for a lot of action — unless, of course, I flopped a big hand.

I continued to mostly play "small ball" for the first eight hours. I was dealt a few strong hands (no A-A; K-K once, Q-Q three times, J-J three times, 10-10 once) and was fortunate to win with each of them. I managed to build my stack as high as 26,700, mostly by playing lesser hands aggressively in late position. Then I overplayed A-K at the end of hour number eight, dropping my chip count to 21,775.

Happily I won seven of the nine hands I played during the next two hours. None were big pots, but I managed to double my stack to 13,950 by the time we quit for the night.

Of the 8,773 players who started, about 3,000 of us remained alive. We were instructed to count our chips, record our name and chip total and seal that information in a plastic bag along with our chips. When play resumed on Day Two, each of us would be assigned a new table and seat and our bagged chips would be waiting there for us. The average chip count was about 25,000, so I was well behind the curve. There would be 1,250 of blinds and antes in the pot before each hand was dealt, so my ratio would be just above 10. I would need to pick my spots carefully — and win the first or second hand I played.

Early in first hour I was dealt the 9-6 of spades in the big blind. A player in middle position opened for 1,500 (a standard raise of three times the big blind). Three players called before the action got back to me. I already had 500 in the pot, and the pot contained a total of 7,250 at that point. It would cost me 1,000 to call. My hand was weak, but with the pot offering me more than 7 to 1 odds, I made the decision to call. Luck was with me, as the flop came out 9-9-3. I checked. The middle position opener bet 2,000, representing a high pair. Everyone folded, and I decided not to raise yet. I just called. Fourth street was a 5. I bet 2,500 hoping to get raised, but my lone opponent folded. Still, I increased my stack by nearly two-thirds.

I won three of the next four hands I played. At the end of the two hour round, my chip count was up to 21,500.

Unfortunately I was mostly "card dead" for the next two hours. I played only four hands during the entire two hours of Level 8. I won three of them without showing my hand and ended the round with 26,000 chips — close to my high water mark.

I played 10 hands during the next level and won five small pots without showing a single hand. When we broke for dinner at about 7:30, I had increased my stack to 34,000 and was feeling pretty good. I had not made any costly mistakes and had built my stack from 13,950 to 34,000 despite getting only two premium starting hands (K-K once, A-K once). Still, I knew I would need to win a lot of chips to survive three more levels and make it to the third day.

Early in Level Ten I was dealt 2-2 on the button (last position). A very aggressive player in late position opened for 3,000 (three times the big blind). I re-raised to 9,000 and did not expect him to call me unless he had a big pair or A-K. He folded, but to my chagrin, the player on my left called the double raise in the small blind. He was a very conservative, predictable player and I did not think he would call that big a bet without a very big hand. When the flop came out A-Q-10 the small blind checked and so did I, hoping to hit a 2 on the turn. Instead the dealer brought a 9, and the player in the small blind made a large bet. I had to fold. As he raked the 24,000 chips he flashed A-A.

I sat there for a minute, kind of stunned, not wanting to accept that I'd been eliminated. After battling to survive for 19 hours over two days, increasing my stack to 3½ times the amount I had started with, and outlasting 7,300 players, in the space of two hands five minutes apart it was over. Slowly I collected my stuff and left the table.

I once heard Chris ("Jesus") Ferguson say that the worst day of the year for every tournament poker player is the day you get knocked out of the World Series main event. I tried to feel good about outlasting 7,300 other players, many of whom are more experienced and talented than I am. I tried to feel good about playing well and not beating myself.

But in the end, I could not stand the fact that 1,500 players, at least 1,000 of whom were no better than I, were still competing and I was on the sidelines. I shuffled off to my room, packed my bags and headed to the airport for the red-eye flight home.