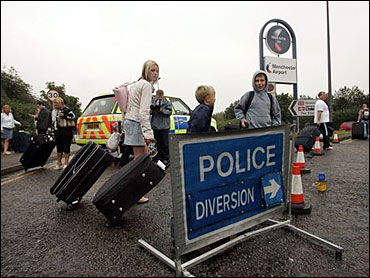 Police arrested a man under the anti-terrorism law Friday at Manchester airport, which was partly closed while a bomb disposal unit carried out a controlled explosion.

Police used a Taser gun to subdue the suspect, who had been seen acting suspiciously in the area where aircraft are parked at about 8:30 a.m. (0730GMT), Greater Manchester Police said in a statement.

The man was being interrogated at a police station, the statement said.

National Air Traffic Services said the number of flights in and out of Manchester were restricted for a while, but restrictions had been lifted by 11 a.m. (1000GMT).

"A car believed to belong to the man is currently being recovered for further examination. There are no further details about the vehicle," Greater Manchester Police said.

The British Broadcasting Corp. reported that a man with a suitcase had been seen walking under an aircraft. A bomb disposal unit carried out a controlled explosion on the suitcase, the BBC said.

Manchester Airport, which serves more than 19 million passengers per year, says it ranks as the 12th busiest airport in Europe.