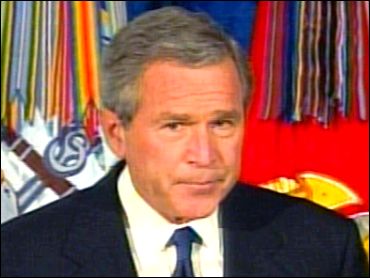 While most politicians like making headlines, Democrats and Republicans generally dislike being the subject of Maureen Dowd's sharp commentary on the Op Ed page of the New York Times. Her new book, "Bushworld: Enter At Your Own Risk," is a compilation of columns about the current president and his father.

As The Early Show co-anchor Hannah Storm points out, Dowd has a penchant for nicknames. For instance, she sometimes refers to George H.W. Bush as "Old King" and his son, the current President Bush, as "Boy King." What sort of relationship did Dowd have with the elder Bush?

"He describes it is as a love/hate relationship, because he loved it when I would tweak the Clintons and hates it when I tweak the Bushes," says Dowd.

Storm says she psychoanalyzes the father-son relationship, citing a quote from the book: "W. avenged his dad, replaced his dad, made his dad proud and rebelled against his dad all with the same war." Dowd's diagnosis: They have "an Oedipal loop-de-loop.

"In a way, it follows the hero myth of 'Star Wars,' with the president as Luke Skywalker, and he has the good father, his own dad, who believed in internationalism and the Atlantic alliance and doing things with the allies and coalitions. Then you have the bad, dark father, Darth Vader, which is Dick Cheney, and he sort of led the president down this gloomy, dark, paranoid path of unilateralism and sort of bullying the world. (This is) a very different attitude than the Bush family had had in its history."

So, Storm wanted to know, does Dowd think the current president intentionally turned his back on his father's internationalism and traditional alliances? Dowd calls this a teenage rebellion that was played out on the international stage.

"And the fact that he didn't even call his dad before he went back to finish his dad's war a different way just strikes me as amazing."

Does Dowd know for a fact that George W. Bush never consulted his father regarding the war in Iraq?

"I think the son didn't want to hear what the dad had to say, which was, 'Do you have an exit strategy?'"

Dowd writes: "In Bushworld, our troops go to war and get killed, but you never see the bodies go home. In Bushworld, we're making progress in the war on terror by fighting a world that creates terrorists." Pundits have said that Maureen Dowd is a liberal. Does she see herself that way?

"I think I'm an equal opportunity skeptic," she replies. "I used to tweak Clinton just as much."

She won a Pulitzer Prize for her columns on President Clinton's impeachment, and she says she does feel that whoever is in the White House is fair game. If John Kerry should become president, would Dowd have enough material?

"Well, I think Teresa is very promising," Dowd comments, "and I think…the White House…tends to be like a soundproof booth. And presidents go in promising certain things, like...no new taxes. But then they get in there and change."

Was she surprised to see Laura Bush speak out publicly against stem cell research?

"I think it's a huge mistake," says Dowd. "They drag Laura on to the campaign trail, because she had such high approval ratings and they needed that after the Iraq war.

"Laura is this fantastic, nice, 'Marian the librarian' type, curled up with a cat on her lap, reading Dostoevsky," continues Dowd. "Now she's dragged out to be a Republican attack dog on the most contentious issue…stem cell research, defending her husband's refusal to use more lines... Now she's pitted against Nancy Reagan, the sainted former first lady, and I don't think it's a good position for her."

AN EXCERPT FROM BUSHWORLD: Enter At Your Own Risk

Adventures in an Alternate Reality

It's their reality. We just live and die in it.

In Bushworld, our troops go to war and get killed, but you never see the bodies coming home.

In Bushworld, flag-draped remains of the fallen are important to revere and show the nation, but only in political ads hawking the president's leadership against terror.

In Bushworld, we can create an exciting Iraqi democracy as long as it doesn't control its own military, pass any laws or have any power.

In Bushworld, we can win over Falluja by bulldozing it.

In Bushworld, it's fine to take $700 million that Congress provided for the war in Afghanistan
and 9/11 recovery and divert it to the war in Iraq that you're insisting you're not planning.

In Bushworld, you don't consult your father, the expert in being president during a war with Iraq, but you do talk to your Higher Father, who can't talk back to warn you to get an exit strategy or chide you for using Him for political purposes.

In Bushworld, it's O.K. to run for re-election as the avenger of 9/11, even as you make secret deals with the Arab kingdom where most of the 9/11 hijackers came from.

In Bushworld, you get to strut around like a tough military guy and paint your rival as a chicken hawk, even though he's the one who won medals in combat and was praised by his superior officers for fulfilling all his obligations.

In Bushworld, it makes sense to press for transparency in Mr. and Mrs. Rival while cultivating your own opacity.

In Bushworld, you can reign as the antiterror president even after hearing an intelligence report about Al Qaeda's plans to attack America and then stepping outside to clear brush.

In Bushworld, those who dissemble about the troops and money it will take to get Iraq on its feet are patriots, while those who are honest are patronizingly marginalized.

In Bushworld, they struggle to keep church and state separate in Iraq, even as they increasingly merge the two in America.

In Bushworld, you can claim to be the environmental president on Earth Day while being the industry president every other day.

In Bushworld, you brag about how well Afghanistan is going, even though soldiers like Pat Tillman are still dying and the Taliban are running freely around the border areas, hiding Osama and delaying elections.

In Bushworld, imperfect intelligence is good enough to knock over Iraq. But even better evidence that North Korea is building the weapons that Saddam could only dream about is hidden away.

In Bushworld, the CIA says it can't find out whether there are WMD in Iraq unless we invade on the grounds that there are WMD.

In Bushworld, there's no irony that so many who did so much to avoid the Vietnam draft have now strained the military so much that lawmakers are talking about bringing back the draft.

In Bushworld, we're making progress in the war on terror by fighting a war that creates terrorists.

In Bushworld, you don't need to bother asking your vice president and top Defense Department officials whether you should go to war in Iraq, because they've already maneuvered you into going to war.

In Bushworld, it's perfectly natural for the president and vice president to appear before the 9/11 commission like the Olsen twins.

In Bushworld, you pride yourself on the fact that your administration does not leak to the press, while you flood the best-known journalist in Washington with inside information.

In Bushworld, you list Bob Woodward's Plan of Attack as recommended reading on your campaign Web site, even though it makes you seem divorced from reality. That is, unless you live in Bushworld.

Excerpted from Bushword by Maureen Dowd, published by G. P. Putnam's Sons, a member of Penguin Group (USA) Inc., all rights reserved, reprinted with permission from the publisher.size>