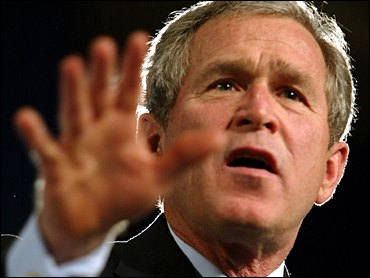 The charge of "flip-flopping" has resounded throughout the presidential race, with the Bush campaign repeatedly accusing Sen. John Kerry of changing his mind on the issues. The Kerry campaign, in turn, has declared that Mr. Bush is the one doing the flip-flopping.

CBSNews.com Chief Political Writer David Paul Kuhn looks at the record and finds both men are correct. Here, the president's most notable flip-flops.

Announcing the invasion of Iraq on March 19, 2003, Mr. Bush said, "Intelligence gathered by this and other governments leaves no doubt that the Iraq regime continues to possess and conceal some of the most lethal weapons ever devised."

Two months into the war, on May 29, 2003, Mr. Bush said weapons of mass destruction had been found.

"We found the weapons of mass destruction. We found biological laboratories," Mr. Bush told Polish television. "For those who say we haven't found the banned manufacturing devices or banned weapons, they're wrong, we found them."

On Sept. 9, 2004, in Pennsylvania, Mr. Bush said: "I recognize we didn't find the stockpiles [of weapons] we all thought were there."

Nation Building and the War in Iraq

During the 2000 campaign, George W. Bush argued against nation building and foreign military entanglements. In the second presidential debate, he said: "I'm not so sure the role of the United States is to go around the world and say, 'This is the way it's got to be.'"

The United States is currently involved in nation building in Iraq on a scale unseen since the years immediately following World War II.

During the 2000 election, Mr. Bush called for U.S. troops to be withdrawn from the NATO peacekeeping mission in the Balkans. His administration now cites such missions as an example of how America must "stay the course."

Iraq and the Sept. 11 Attacks

In a press conference in September 2002, six months before the invasion of Iraq, President Bush said, "you can't distinguish between al Qaeda and Saddam when you talk about the war on terror... they're both equally as bad, and equally as evil, and equally as destructive."

The Sept. 11 commission found there was no evidence Saddam was linked to the 9/11 attacks, which killed nearly 3,000 people.

President Bush initially opposed the creation of an independent commission to investigate the Sept. 11 attacks. In May 2002, he said, "Since it deals with such sensitive information, in my judgment, it's best for the ongoing war against terror that the investigation be done in the intelligence committee."

Bowing to pressure from victims' families, Mr. Bush reversed his position. The following September, he backed an independent investigation.

During the 2000 presidential election, Mr. Bush championed free trade. Then, eyeing campaign concerns that allowed him to win West Virginia, he imposed 30 percent tariffs on foreign steel products from Europe and other nations in March 2002.

Twenty-one months later, Mr. Bush changed his mind and rescinded the steel tariffs. Choosing to stand on social issues instead of tariffs in steel country – Ohio, Pennsylvania and West Virginia – the Bush campaign decided it could afford to upset the steel industry rather than further estrange old alliances.

Mr. Bush reversed himself and backed the largest expansion of the federal government since the creation of the Defense Department in 1949.

During the 2000 campaign, Mr. Bush said he was against federal intervention regarding the issue of same-sex marriage. In an interview with CNN's Larry King, he said, states "can do what they want to do" on the issue. Vice President Cheney took the same stance.

Four year later, this past February, Mr. Bush announced his support for an amendment to the Constitution that defines marriage as being exclusively between men and women. The amendment would forbid states from doing "what they want to do" on same-sex marriage.

Citing recent decisions by "activist judges" in states like Massachusetts, Mr. Bush defended his reversal. Critics point out that well before the 2000 presidential race, a judge in Hawaii ruled in December 1996 that there was no compelling reason for withholding marriage from same-sex couples.

Winning the War on Terror

"I don't think you can win it," Mr. Bush said of the war on terror in August. In an interview on NBC's "Today" show, he said, "I think you can create conditions so that . . . those who use terror as a tool are less acceptable in parts of the world."

Before the month closed, Mr. Bush reversed himself at the American Legion national convention in Nashville. He said: "We meet today in a time of war for our country, a war we did not start yet one that we will win." He later added, "we are winning, and we will win."

President Bush was initially against the McCain-Feingold campaign finance reform bill. He opposed any soft-money limits on individuals to national parties.

During the 2000 race, Mr. Bush showed support for the so-called 527 groups' right to air advertising.

In March 2000, he told CBS News' "Face the Nation," "There have been ads, independent expenditures, that are saying bad things about me. I don't particularly care when they do, but that's what freedom of speech is all about."

In late August of this year, in an effort to distance himself from controversial anti-Kerry ads by the Swift Boat Veterans for Truth, Mr. Bush reversed his position, announcing he would join McCain in legal action to stop these "shadowy" organizations.

Though it would close the Swift Boat group's funding, court action would also silence well-funded liberal 527 organizations like MoveOn.org and America Coming Together.

Mr. Bush was critical of Al Gore in the 2000 campaign for being part of "the administration that's been in charge" while the "price of gasoline has gone steadily upward." In December 1999, in the first Republican primary debate, Mr. Bush said President Clinton "must jawbone OPEC members to lower prices."

As gas topped a record level of $50 a barrel this week, Mr. Bush has shown no propensity to personally pressure, or "jawbone," Mideast oil producers to increase output.

A spokesman for the president reportedly said in March that Mr. Bush will not personally lobby oil cartel leaders to change their minds.