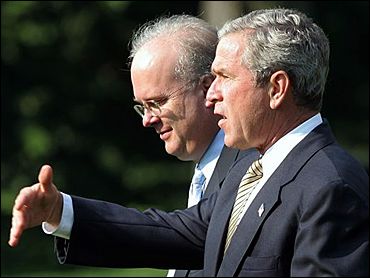 
President Bush's campaign won re-election through the strategic gamble that there was more to gain from galvanizing conservatives and stressing moral issues than from reaching out to centrist voters.

The election swung on Ohio's 5.8 million voters. In what proved to be a pivotal endgame decision, the Bush-Cheney campaign refocused on the Buckeye State in the last two weeks, visiting it on seven of the last 12 days prior to the election.

Previously, Mr. Bush had paid more attention to Pennsylvania, visiting it more than any other state since he took office. Pennsylvania ultimately went for Kerry.

Ohio lost one-fourth of the nation's manufacturing jobs – 230,000 since Mr. Bush took office – yet even there 23 percent of voters said morality was the most important issue in determining their vote, second only to the economy.

"Ohio with the job loss figure should have been an easy win for Sen. Kerry but it wasn't, essentially because of these values issues," said Gary Bauer, a leading social conservative. "To some extent voters in Ohio may have felt, 'I'm not happy about the job loss but I can't do anything about those international trends anymore than George Bush could.'"

Though this was the first election since 1972 where war was at the forefront, exit polling showed moral values was the number one issue to voters on average nationwide.

Though he won support from social conservatives nationwide, it was not evangelical Protestants alone who tipped the scale in Mr. Bush's favor. Strikingly, John Kerry, the would-be second Catholic president, was unable to capture more Catholic votes than Mr. Bush, a born-again Christian. An altar boy as a child, Kerry won only 44 percent of Catholics; Mr. Bush improved on his 2000 mark, grabbing 55 percent of Catholic support.

"We've either got to find a way to win much more strongly among women, which we have done in the past, which I believe we did in 1992. Or we've got to find a way to gain the trust of white men who do not believe that Democrats serve their interests," said Steve Grossman, who co-chaired John Kerry's 1996 Senate campaign and was chairman of the Democratic National Committee during Bill Clinton's presidency.

Indications are that evangelical whites turned out heavily for the president in Ohio and elsewhere. A contributing factor for their high turnout may have been the amendment to ban same-sex marriage, which passed in Ohio, as well as in the ten other states.

President Bush's chief political adviser, Karl Rove, pressed the Republican secretary of state of Ohio to have the marriage ban on the ballot. Though all indications are Mr. Bush had a principled belief that marriage should only be defined between a man and a woman, Rove believed the measure would galvanize his base – even if it meant the estrangement of an estimated 1 million gay Republicans.

Rove's decision to largely ignore independent voters at the close of the election was a strategic gamble. But by early Wednesday morning, Rove looked to have hit the jackpot – yet again. (That's possibly why President Bush called Rove the "architect" as he accepted a second term in office Wednesday afternoon.)

"I think that the Democratic Party has a real problem," said Bauer, who heads the advocacy group American Values, which lobbied strongly for the same-sex marriage bans. "They continue to be perceived as way out of step on these cultural issues. As a result of that, places like West Virginia, Ohio, Missouri, even states like Wisconsin, are now fertile ground for the Republican Party."

One key to President Bush's victory was that two core Kerry continuances – young voters and African Americans – did not turn out in to the degree necessary for Democrats to win.

Though millions more 18-to-29-year-olds voted this year than four years ago, they remained the same 17 percent of the electorate as in 2000.

In the crucial swing state of Florida, which Mr. Bush won, blacks accounted for 12 percent of all voters, down from 15 percent in 2000. In Ohio, blacks were 10 percent of the electorate, up by only one percentage point from 2000.

Leading civil-rights activist Jesse Jackson didn't expect this. Also a senior adviser to Kerry, Jackson thought African Americans would swing the election to Kerry by turning out in massive numbers.

"Blacks historically vote our interests. Blacks chose Lincoln over Jefferson Davis; we made that choice. We went to Roosevelt because he provided jobs. We stayed with Truman because he was bringing the troops home," Jackson said on Election Day. "Blacks who could vote went to Eisenhower because he promised to bring our boys home from Korea. Blacks shifted and went to Kennedy over Nixon and then to LBJ over Goldwater."

Though Jackson wouldn't say it, the sense was African Americans in the end didn't feel they had a vested interest in a Kerry victory. On Wednesday, in a follow-up interview, he called his role in the Kerry campaign, "largely symbolic," indicating he was not involved in key decisions.

Jackson said that one strategic mistake by the Democratic campaign was that it did not have a "general election team" when Kerry secured the nomination in early March.

Staffers to former President Clinton who were brought on in September were responsible for the more combative Kerry who emerged after his bad August, according to interviews with senior Kerry aides at the time. But Jackson's point is: why weren't they brought in sooner?

A number of other strategic errors plagued the Kerry campaign. Among them: