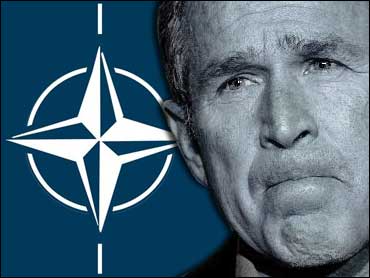 Washington's effort to build a coalition for war against Iraq hit more resistance from NATO and beyond, with allies balking and China adding its voice to calls for bolstered U.N. arms inspections.

A second day of heated negotiations Tuesday failed to end one of the worst crises in NATO's 53-year history: a split triggered when France, Germany and Belgium blocked U.S. plans to defend Turkey in a possible new Persian Gulf war.

After behind-the-scene talks throughout the day, ambassadors from the 19 NATO countries met for only 20 minutes Tuesday evening before ending the session. Talks are to resume Wednesday morning.

"Right now we do not have a conclusion," said NATO spokesman Yves Brodeur. Informal negotiations would continue through the night, he said.

The NATO split also threatened to undermine U.S. efforts to muster support in the U.N. Security Council for a military strike on Iraq. France, Russia and Germany seek to increase U.N. inspections to avert war, a stance that drew backing Tuesday from China.

Chinese President Jiang Zemin, in a telephone call with French President Jacques Chirac, reiterated China's longtime stance that everything possible should be done find a peaceful solution to the Iraq crisis.

Beijing's support means three permanent members of the council — with veto power — are now lined up against the United States and Britain in opposition to war with Saddam.

"The inspection in Iraq is effective and should be continued and strengthened," China's official Xinhua news agency paraphrased Jiang as saying Tuesday. "Warfare is good for no one, and it is our responsibility to take various measures to avoid war."

Besides China, France and Russia also were in line to block a Security Council resolution calling for war, with Moscow adding its voice Monday in support of intensified arms inspections.

Despite the opposition, the White House said there was still a reasonable expectation that President Bush could persuade the Security Council to adopt a new resolution. "At the end of the day, the president would like to believe the United Nations will be relevant," spokesman Ari Fleischer told reporters.

Powell said he read a transcript of "what bin Laden or who we believe to be bin Laden" will be saying on the Al-Jazeera Arab satellite station later Tuesday, "where once again he speaks to the people of Iraq and talks about their struggle and how he is in partnership with Iraq."

Weapons inspections continued in Iraq, with a U.N. team paying a surprise visit to a Baghdad missile plant Tuesday as international experts met behind closed doors in New York to assess whether Iraq's short-range missiles can fly farther than permitted under U.N. edicts.

In their daily rounds of inspections, conducted despite a Muslim holiday in Iraq, a U.N. team went to the 17th of Nissan factory, which makes molds and casts, including components for Iraq's al-Samoud ballistic missiles, the Information Ministry reported.

NATO's disarray drew international headlines, with Danish newspapers proclaiming, "NATO in a historic crisis" and "NATO is the hostage of the Iraq conflict."

The crisis cast doubt on the future of an alliance founded to fight the Cold War: In seeking to reinvent itself as a force to counter terrorism or rogue states, the alliance has yet to agree on even modest defensive measures for one of its members.

"It is a matter of enormous consequences for the alliance," NATO Secretary-General Robertson said after talks Monday failed to soften resistance to military preparations for Turkey.

"The longer this dispute goes on, the worse it is going to be for the alliance and for them," Robertson warned.

Ambassadors from the 19 allies had struggled to find a way to send Turkey AWACS early warning planes, Patriot anti-missile batteries and units trained to counter chemical and biological weapons.

The United States says those measures are needed to protect Turkey — the only NATO nations bordering Iraq — from an Iraqi missile strike, as the U.S. prepares to move troops into Turkey for a possible northern front against Iraq.

France and its supporters argue that military planning would set NATO on a path to war and undermine efforts for a peaceful solution.

Playing down the threat to Turkey, they want to delay NATO planning at least until Friday's report to the Security Council from U.N. weapons inspectors on any Iraqi progress.

The split has plunged the North Atlantic Treaty Organization into what some at alliance headquarters called its worst crisis since the mid-1960s, when then French President Gen. Charles de Gaulle withdrew from the alliance military structure and forced NATO to move its headquarters from Paris to Brussels.

The crisis, which has been bubbling for almost a month, came to a head Monday when France, Germany and Belgium rebuffed Turkey's direct appeal for help issued under NATO's mutual defense treaty.

Their move drew criticism from Washington and most other European allies, who fear it sends a signal of disunity to Saddam and strikes at the heart of NATO's united defense pledge.

"This is the most fundamental rule in NATO, on which we, too, base our security," Norway's Defense Minister Kristin Krohn Devold said in Oslo, adding that she was appalled by France, Germany and Belgium's decision.

In Washington, President Bush, said: "It affects the alliance in a negative way when you are not able to make a statement of mutual defense."

"Upset is not the proper word," Mr. Bush said when reporters asked for his views on France's diplomacy. "I am disappointed that France would block NATO from helping a country like Turkey to prepare."

Secretary Powell noted Tuesday that while "much is being said about disagreement in NATO,'' that 16 members – including the United States and Turkey – back the U.S. position, while just three oppose it.

Powell said the United States is prepared to work with the 14 other nations to give Turkey the helps it needs if it cannot win formal NATO support.