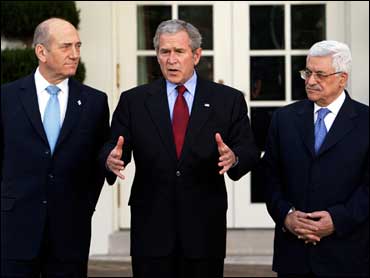 Why not go to the Middle East now? Will there be a better time in the coming year? Perhaps, but probably not. And certainly not if President George W. Bush doesn't show some progress on this trip. So, now very well may be the best time to go to the region which has every indication of dominating Mr. Bush's last year in office.

Keeping the forward movement gained last November at Annapolis between Israelis and Palestinians will dominate the first few days of the president's 8-day trip. The parties have been meeting feverishly in recent days so they can have something positive to show when the president has his meetings in Israel and the West Bank. It's typical of the diplomacy between the two sides that if they are able to agree on next steps it will likely happen only at the last minute, just before Air Force One lands.

Ken Pollack of the Saban Center at the Brookings Institution says what Mr. Bush is doing is really "not that laudable" but since he travels so infrequently -- this is his first trip to Israel as president -- this trip will take on a diplomatic importance greater than it deserves. According to Pollack "…the reality is that the president does need to be more involved and the president does need to be involved in day-to-day diplomacy."

Secretary of State Condoleezza Rice may have visited the region eight times last year, but with only a year left in office Mr. Bush now must show the parties and their neighbors that he indeed is serious about getting a deal done before he leaves office.

"President Bush is no longer trying to transform the Middle East from afar; he's trying to manage it in incremental ways by arm-twisting and jawboning leaders in intimate, private sessions," says Jon Alterman, of the Center for Strategic and International Studies.

Those private sessions will become even more important as Air Force One makes its way from one Arab capital to another. The leaders he meets with will not only want to see a seriousness of purpose on Israeli-Palestinian negotiations, they'll want to see it on Iran, on Iraq, even on Pakistan.

"I think the president will face a tough act convincing the Arabs and the Palestinians that this administration is serious about getting heavily involved in the Israeli-Palestinian process and has an answer to the problems of either Hamas or Iran," says Bruce Riedel of the Saban Center, a former senior official at the NSC and CIA. Riedel also notes Arab leaders will be interested in how Mr. Bush plans to deal with Pakistan's president, Pervez Musharraf, who, like many of them, fears the uncertainties which increased democratic moves can bring.

The trip was always designed to deal with the threat posed by Iran to its regional neighbors and this week's incident between Iranian Revolutionary Guard fast boats and U S Navy warships in the Strait of Hormuz only serves to highlight the importance of Tehran's ability to cause regional instability, not to mention its nuclear ambitions. America's Gulf allies still have their reservations about the administration's recent public release of its national intelligence estimate on Iran and Mr. Bush will have his work cut out for him persuading Gulf leaders that Iran is still the threat the U.S. and Israel claim it to be.

National security advisor Stephen Hadley says the emphasis will be on quiet conversation: "I think there's a lot of misunderstanding about how we do intelligence here … And I think the president is going to want to go and talk privately and quietly to indicate that we understand the challenge that Iran represents to the region … that … our friends and allies in the region can count on our commitment to the region and our continued presence in the region."

Even though Mr. Bush is expected to raise his freedom and democracy agenda during a speech in the UAE, Hadley told reporters "We're not looking for headline announcements. What the president is looking for is for better understanding of the challenges we face, and a commitment to dealing with that challenge."

Hadley's approach has the benefit of lowering expectations and at the same time relying on private and personal diplomacy which most in the region favor. On the other hand, this administration does have a penchant for surprise -- perhaps in the form of a three-way meeting with Israeli and Palestinian leaders or even an unannounced side trip to Iraq to visit with American troops and Iraqi political leaders. After the trip America's allies in the region will have to determine for themselves whether they want to embrace Mr. Bush and his efforts for another year or stay on the sidelines and await the outcome the elections in the U.S. and take their chances on the policies of this administration's successor.