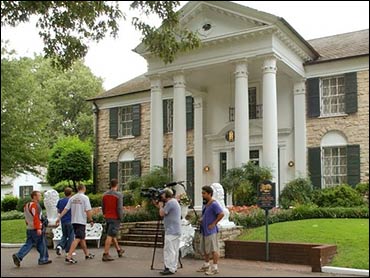 
It'll be a presidential first on Friday when President Bush accompanies Japanese Prime Minister Junichiro Koizumi on a pilgrimage to Graceland, the estate in Memphis that was home to rock 'n' roll legend Elvis Presley.

Koizumi is an unabashed Elvis fan. He shares a Jan. 8th birthday with the late singer and once put out a charity record album titled: "Junichiro Koizumi Presents My Favorite Elvis Songs." No kidding!

Pres. Bush, who calls Koizumi "one of my best buddies in international politics" is so tickled by Koizumi's affection for Elvis and his music that he mentioned it more than 20 times during the '04 re-election.

"Laura and I are very fond of him," said Mr. Bush at a campaign event in Paradise Valley, Arizona. "He's an interesting, interesting man. His favorite singer is Elvis ... pretty unusual."

No question about that.

Even more interesting are the connections that other American presidents had to Elvis.

Perhaps more than any other president, Bill Clinton felt a certain kinship to Presley. They were both sons of the South who rose from very humble beginnings.

But only one President claimed to have been a relative of Elvis.

Mr. Carter said that when Elvis would come to Atlanta, "we would visit with him (and) obviously attend his concerts."

But there's no question Elvis transcended party lines — and not always in a favorable way.

In the campaign of 1992, the first President Bush, seeking re-election, used an "Elvis" reference to try to belittle challenger Bill Clinton.

In his speech to the Republican National Convention accepting its nomination for a second term, Mr. Bush accused his opponent of advocating "Elvis economics."

"If he gets his way, hardware stores across America will have a new sign up, "Closed for despair." He said if Mr. Clinton were elected: "America will be checking into the Heartbreak Hotel."

Later in the campaign, Mr. Bush expanded his reference to Elvis saying: "I think we ought to treat those Clinton/Gore ideas the way Elvis would: 'Return to sender.' "
But no President had a stranger Elvis experience than Richard Nixon.

In 1970, Elvis showed up at the Nixon White House without an appointment, but told the guards at the gate he wanted to see the President.

And he got his wish. Wearing tight velvet pants, a dark purple cape and a white silky shirt open to below his chest, Elvis asked Mr. Nixon to make him a federal narcotics agent.

He may not have been much of a drug enforcement agent, but he is seen as having served his country in another way.

Addressing a White House Conference on Culture and Diplomacy in November 2000, then-President Clinton offered this geo-political assessment of Elvis:

"I think it's probably not wrong to say that Elvis Presley did more to win the Cold War when his music was smuggled into the former Soviet Union than he did as a GI serving in Germany."

Clearly, by taking Koizumi to Graceland, Mr. Bush is giving his friend a photo op that will play well back in Japan, where Elvis still has an ardent following.

Though President Bush might feel more at home if he took Koizumi to an old-style western town that might have given the Japanese leader a look at the setting of what he has called his favorite American movie: "High Noon."


Editors Note: CBS News White House correspondent Mark Knoller was a reporter for AP Radio when he covered the 1977 death and funeral of Elvis Presley. Knoller was among the first reporters allowed to view the late Elvis in an open casket situated in the foyer of the Graceland Mansion.
By Mark Knoller
View CBS News In
CBS News App Open
Chrome Safari Continue
Be the first to know
Get browser notifications for breaking news, live events, and exclusive reporting.