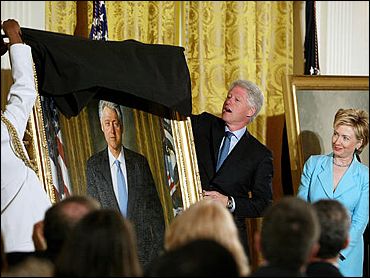 President Bush offered a flattering tribute to former President Clinton on Monday as the White House unveiled the official portraits of the 42nd president and his wife, Sen. Hillary Rodham Clinton.

Mr. Bush rode into office on a promise "to restore honor and dignity" to the White House after eight years of Mr. Clinton, and he was bitter at his predecessor defeating his father in the 1992 presidential contest. But on Monday, Mr. Bush delivered a lengthy, forceful defense of his predecessor, and welcomed dozens of Clinton administration officials back into the White House.

"As a candidate for any office, whether it be the state attorney general or the president, Bill Clinton showed incredible energy and great personal appeal," Mr. Bush said. "As chief executive, he showed a deep and far-ranging knowledge of public policy, a great compassion for people in need, and the forward-looking spirit that Americans like in a president."

"Bill Clinton could always see a better day ahead and Americans knew he was working hard to bring that day closer," Mr. Bush said. "Over eight years it was clear that Bill Clinton loved the job of the presidency. He filled this house with energy and joy. He's a man of enthusiasm and warmth, who could make a compelling case and effectively advance the causes that drew him to public service."

Mr. Clinton and his wife — now in the Senate — returned to the White House for the official presentation of the portraits that will hang in the White House. The former president's portrait will hang near the Grand Staircase just inside the north entrance of the White House. It will bump a portrait of the first President Bush to another position in the hall. The portrait of Hillary Rodham Clinton, now the junior U.S. senator from New York, will be displayed one flight below with other former first ladies.

"She inspires respect and loyalty from those who know her, and it was a good day in both their lives when they met at the library at Yale Law School," Mr. Bush said of Mrs. Clinton and her husband.

Mr. Clinton said: "The president, by his generous words to Hillary and me today, has proved once again that in the end, we are held together by this grand system of ours that permits us to debate and struggle and fight for what we believe is right."

"And because it's free, because it is a system of majority rule and minority rights, we're still around here after over 200 years. And most of the time, we get it right. And I'm honored to be a small part of it."

Mr. Clinton's portrait was painted by Simmie Knox, a self-taught artist born in 1935 in Aliceville, Ala., to a family of black sharecroppers.

He is the first black painter to be commissioned for a presidential portrait.

"It's one of the highest honors as a portrait painter can have," said Knox, in an interview with CBS News Correspondent Joie Chen. "This is the big one!"