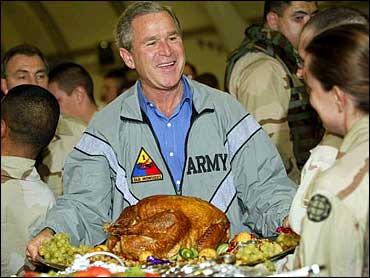 That beautiful golden-brown turkey President Bush held during his surprise visit to U.S. troops in Iraq was for show, not for eating, the Washington Post reports.

The photo of Mr. Bush holding the bird on a platter laden with trimmings was the most memorable image of the president's 2 1/2-hour stay with U.S. troops at the Baghdad International Airport.

The newspaper reported that in response to questions about the bird, the White House said the turkey was a decoration adorning the steam table where GIs picked up their food on cafeteria-style trays.

The White House said the bird had been furnished by a contractor, and that officials had no idea that the turkey would be in the mess hall, or that the president would pick up the trophy turkey.

The Post quoted military sources as saying that a decorative turkey was a standard feature of holiday chow lines.