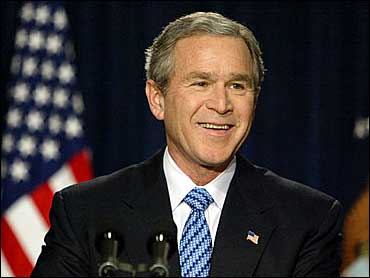 President Bush says there's plenty of time ahead for politics, but now is not that time.

At a Monday press conference dominated by the capture of former Iraqi dictator Saddam Hussein, Mr. Bush turned aside several questions relating to his 2004 re-election campaign.

"There will be plenty of time for politics" after the turn of the year, he said at the White House.

Mr. Bush said he's looking forward to the coming debates as election-time approaches, but in the meantime he's going to continue making decisions based on making America and the rest of the world more secure.

Mr. Bush said he'll keep making those decisions even if people don't agree with them. He said there's "ample time" ahead to have a debate about whether or not his strategies are right.

The year-end news conference was dominated by the weekend arrest of Saddam, whose regime was overthrown by a U.S.-led invasion eight months ago.

Mr. Bush said he had a simple message for Saddam: "Good riddance."

"The world is better off without you, Mr. Saddam Hussein," he added.

The president said Saddam will be put on public trial for his crimes, in a manner to be set in consultation with Iraqis brutalized across three decades of tyranny.

"We will work with Iraqis to develop a way to try him that will withstand international scrutiny," he said.

"There needs to be a public trial and all the atrocities need to come out and justice needs to be delivered," he said.

On a related issue, Mr. Bush said that while the United States had disagreements with France and Germany over the war in Iraq, the traditional allies can still work together. As an example, he cited Iran, where an international effort is under way to prevent the development of nuclear weapons

Mr. Bush also used the news conference to declare that after a long slowdown, the economy is strong and "getting stronger."

"I believe the economy is strong," the president said. "I believe it's getting stronger. I'm pleased with the productivity numbers. I appreciate the fact that orders for durable goods are up. It looks like the manufacturing sector is strengthening."

Mr. Bush also praised Congress for approving his tax cuts, a Medicare prescription drug bill and said, "we will continue pursuing a pro-growth agenda next year."

He said his administration would propose cutting record deficits in half over the next five years, and said he is committed to holding down federal spending. At the same time, he sidestepped when asked whether he intends to propose new tax cuts next year, as some Republican leaders in Congress favor.

Renewing a discussion about what to do about millions of illegal immigrants in America, Mr. Bush said he was firmly opposed to blanket amnesty.

Last week, Homeland Security Secretary Tom Ridge expressed support for giving legal status to immigrants, which officials of his department officials said was meant to reflect congressional debate about immigration. The comment angered some lawmakers, however, who thought it suggested a radical policy reversal.

Ridge's comments also were seen as restarting discussion by the administration on possible legalization of immigrants living in the country illegally, an issue the administration has been fairly quiet on since the Sept. 11, 2001, attacks.

"I have constantly said that we need to have an immigration policy that helps match any willing employer with any willing employee," Mr. Bush said. "It makes sense that that policy go forward. And we're in the process of working that through now so I can make a recommendation to the Congress."