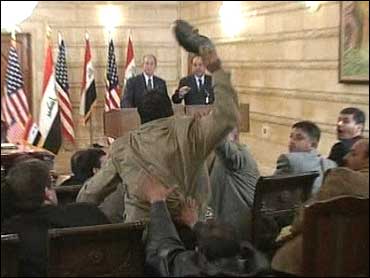 President George W. Bush wrapped up a whirlwind trip to two war zones Monday that in many ways was a victory lap without a clear victory. A signature event occurred when an Iraqi reporter hurled two shoes at Bush, an incident the president called "a bizarre moment."

Bush visited the Iraqi capital just 37 days before he hands the war off to his successor, Barack Obama, who has pledged to end it. The president wanted to highlight a drop in violence and to celebrate a recent U.S.-Iraq security agreement, which calls for U.S. troops to withdraw from Iraq by the end of 2011.

"The war is not over," Bush said, but "it is decisively on its way to being won."

Bush then traveled to Afghanistan where he spoke to U.S. soldiers and Marines at a hangar on the tarmac at Bagram Air Base. The rally for over a thousand military personnel took place in the dark, cold pre-dawn hours. Bush was greeted by loud cheers from the troops.

"Afghanistan is a dramatically different country than it was eight years ago," he said. "We are making hopeful gains."

But the president's message on progress in the region was having trouble competing with the videotaped image of the angry Iraqi who hurled his shoes at Bush in a near-miss, shouting in Arabic, "This is your farewell kiss, you dog!" The reporter was later identified as Muntadar al-Zeidi, a correspondent for Al-Baghdadia television, an Iraqi-owned station based in Cairo, Egypt.

Zeidi, 29, has been working for Al-Baghdadiya since it launched in 2005, reports CBS News' Khaled Wassef in London. Co-workers describe him as a rather quiet and composed.

Zeidi has been arrested before, in error, by American forces and was let go, reports CBS News correspondent Elizabeth Palmer. This time, his family has been told he faces years in jail.

In Iraqi culture, throwing shoes at someone is a sign of contempt. Iraqis whacked a statue of Saddam with their shoes after U.S. Marines toppled it to the ground following the 2003 invasion.

Bush told reporters later that he didn't think "you can take one guy throwing shoes and say this represents a broad movement in Iraq. You can try to do that if you want but I don't think that would be accurate."

Reaction in Iraq was swift but mixed, with some condemning the act and others applauding it. Television news stations throughout Iraq repeatedly showed footage of the incident, and newspapers carried headline stories.

In Baghdad's Shiite slum of Sadr City, supporters of radical Shiite cleric Muqtada al-Sadr called for protests against Bush and demanded the release of the reporter. Thousands took to the streets Monday, chanting, "Bush, Bush, listen well: Two shoes on your head."

Talking to a small group of reporters after the incident, Bush said, "I didn't know what the guy said, but I saw his sole." He told the reporters that "you were more concerned than I was. I was watching your faces."

"I'm pretty good at ducking, as most of you know," Bush joked, adding quickly that "I'm talking about ducking your questions."

On a more serious note, he said, "I mean, it was just a bizarre moment, but I've had other bizarre moments in the presidency. I remember when Hu Jintao was here. Remember? We had the big event? He's speaking, and all of a sudden I hear this noise - had no earthly idea what was taking place, but it was the Falun Gong woman screaming at the top of her lungs (near the ceremony on the White House lawn). It was kind of an odd moment."

The Iraqi government condemned the act and demanded an on-air apology from Al-Baghdadia television, the Iraqi-owned station that employs Muntadar al-Zeidi.

Several people descended on the man immediately after, wrestling him to the ground, and it took a minute or two for security agents to clear the crowd and start hauling him out. As they dragged him off, he was moaning and screaming as if in pain. Later, a large blood trail could be seen on the carpet where he was dragged out of the room.

He was taken into custody and reportedly was being held for questioning by Prime Minister Nouri al-Maliki's guards and is being tested for alcohol and drugs.

Other Arab journalists and commentators, fed up with U.S. policy in the Middle East and Bush's decision to invade Iraq in 2003 to topple Saddam, echoed al-Zeidi's sentiments Monday. Abdel-Bari Atwan, editor of the influential London-based newspaper Al-Quds Al-Arabi, wrote on the newspaper's Web site that the incident was "a proper goodbye for a war criminal."

After a brief refueling stop in England, Bush headed back to the United States. He was greeted on the South Lawn by the rousing applause of an unusually large crowd, as White House staff members had been invited outside to welcome him home.

The mixed reactions to Bush in both Iraq and Afghanistan emphasized the uncertain situations Bush is leaving behind in the region.

In Iraq, nearly 150,000 U.S. troops remain in Iraq, protecting the fragile democracy. More than 4,209 members of the U.S. military have died and $576 billion has been spent since the war began five years and nine months ago.

In Afghanistan, there are about 31,000 U.S. troops and commanders have called for up to 20,000 more. The fight is especially difficult in southern Afghanistan, a stronghold of the Taliban where violence has risen sharply this year.