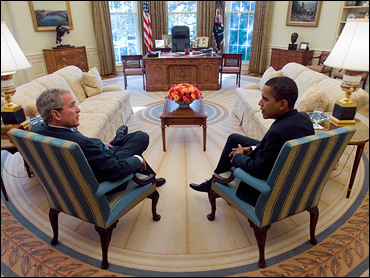 President-elect Barack Obama and President Bush gathered for their first face-to-face meeting Monday, an Oval Office session that came during a historic shifting of power to a new administration.

Neither the incoming nor the current president spoke to reporters at Mr. Obama's arrival or departure Monday afternoon. Mr. Bush walked Mr. Obama to his limousine as he left.

The Obamas spent just under two hours at the White House.

Mr. Obama and his wife, Michelle, arrived at the South Portico 11 minutes early with President Bush and first lady Laura Bush waiting for them. Mrs. Bush and Mrs. Obama enjoyed a warm greeting, while the president and his successor exchanged smiles and a handshake.

Taking a bit of prerogative, the president-elect put his left hand on Mr. Bush's back as the two couples entered the Diplomatic Reception Room.

Mr. Bush and Mr. Obama strolled along the Colonnade and waved for their cameras while their wives began a meeting of their own. The president and the president-elect then headed into the Oval Office to talk about the future of the country, with topics likely including the financial crisis and the war in Iraq. Mr. Bush allowed Mr. Obama to enter the historic office first.

It was the president-elect's first visit to the White House since his landslide election victory - and his first visit ever to the Oval Office.

After the meeting Bush White House spokeswoman Dana Perino said that the president described the meeting as "constructive, relaxed and friendly," covering problems at home and abroad, and said he personally pledged a smooth transition. Mr. Bush gave Mr. Obama a sneak peek at White House highlights, such as the Lincoln Bedroom and the president's office in the residence, after their hour-plus in the Oval Office.

Mr. Obama's transition team released a statement saying that Mr. Obama and Mr. Bush had a "productive and friendly meeting."

"They had a broad discussion about the importance of working together throughout the transition of government in light of the nation's many critical economic and security challenges," the statement continued.

The president and Mr. Obama also talked about the wars in Iraq and Afghanistan and financial crisis. At the same time, Laura Bush and Michelle Obama talked about raising daughters in the nation's most famous house. Then Obama flew back to Chicago to work on setting up the new administration that will take over on Jan. 20.

The scene was a sunny fall day with moderate temperatures and colorful - but fading - autumn leaves.

The Obamas' arrival had the look of a foreign head-of-state state visit - although there were no fife and drum bands, speeches or official pageantry.

Mr. Bush invited Mr. Obama for the private talk, a rite of passage between presidents and successors that extends for decades.

If there are any lingering bad feelings from nearly two years of Mr. Obama hammering Mr. Bush on the campaign trail, the president has been careful to keep them very well hidden, reports CBS News chief White House correspondent Jim Axelrod.

The moment is steeped in history, part of a symbolic changing of a guard to Democratic leadership and the country's first black president.

"I'm going to go in there with a spirit of bipartisanship, and a sense that both the president and various leaders of Congress all recognize the severity of the situation right now and want to get stuff done," Mr. Obama said last week when asked about his meeting with Bush.

Mr. Obama won the presidency in an electoral landslide on Tuesday. He ran a campaign in which he relentlessly linked Republican opponent John McCain to Mr. Bush and presented his ideas as a fresh alternative to what he called Mr. Bush's failed policies.

Yet the tone changed almost immediately after Mr. Obama's win.

Mr. Bush, who had endorsed McCain, lauded Mr. Obama's victory as a "triumph of the American story." He warmly invited the Obama family to the White House.

Mr. Obama, in turn, thanked Mr. Bush for being gracious. The president-elect has made clear to the people of the United States and those watching around the world that there is only one president for now, and that's Mr. Bush. Mr. Obama is in the transition to power but does not assume the presidency until Jan. 20.

"There's a lot of play-acting involved when a President-elect of the opposition party is received at the White House by the outgoing President," writes CBS News White House Correspondent Mark Knoller. (Read more from Knoller.)

The first lady and Mrs. Obama discussed raising daughters in the White House, according to a statement from the transition team. "Mrs. Obama was honored to finally meet the First Lady, who was a gracious hostess."

Unlike the incoming president, Mr. Bush knew his way around the Oval Office by the time he was elected in 2000 - his father had been president. Still, like many before them, President Clinton and President-elect Bush had their own private meeting, keeping up a tradition that temporarily puts the presidency above politics.

Mr. Obama has been to the White House before, including an emergency leadership session to deal with the financial crisis in September.

But an Obama spokeswoman said the president-elect has never been in the Oval Office.