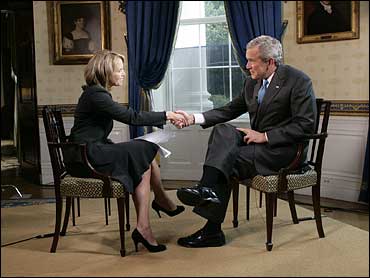 It was one of the worst-kept secrets in the world — and on Wednesday, President Bush confirmed it: In a major speech about the war on terror, the president, for the first time, acknowledged the existence of secret CIA prisons around the world.

He said 14 terror suspects held in them have been moved to Guantanamo Bay — and he's asking Congress to change the law so they can be tried by special military tribunals. The 14 include men allegedly behind the worst terror attacks against the United States, including 9/11.

The President also defended the way terror suspects are being interrogated. CBS Evening News anchor Katie Couric sat down with the President for an exclusive interview at the White House, and she asked him about this transfer to Guantanamo.

"The reason why we're moving them there is we want them to go through a military tribunal. We want them to receive the justice that they denied other people," Mr. Bush said. "But the other thing is that we have to have the capacity to interrogate — not torture, but interrogate people to learn information."

The President says information already obtained from interrogating terror suspects has protected the country from attack.

Couric asked the President if he could give any indication about the kind of information he was able to glean from the "high-valued targets."

"We uncovered a potential anthrax attack on the United States. Or the fact the Khalid Sheikh Mohammed had got somebody to line up people to fly airlines, to crash airlines into I think the West Coast, or somewhere in America, and these would be Southeast Asians," Mr. Bush said.

"This is pretty rich data that has been declassified, so that I'm capable of telling America the importance of the interrogation program, and I'm going to call upon Congress to make sure the interrogators has the capacity to do so without breaking the law. See we're not interrogating now, because CIA officials feel like the rules are so vague that they cannot interrogate without being tried as war criminals. That's irresponsible."

Couric asked Mr. Bush if this is a tacit acknowledgement that the way these detainees were handled was wrong.

"No. Not at all. It's a tacit acknowledgement that we're doing smart things to get information to protect the American people," the President said. "I've said to the people that we don't torture, and we don't."

President Bush also insisted that the war in Iraq is a key part of the war on terror, and that it must be won. Couric asked the President what exactly he means when he says that the country can't cut and run, that the United States must stay to win — otherwise, we'll be fighting the terrorists here at home on our own streets.

"I mean that a defeat in Iraq will embolden the enemy, and will provide the enemy more opportunity, to train, plan to attack us, that's what I mean. One of the hardest parts of my job is to connect Iraq to the war on terror," Mr. Bush said. "I believe it, but the American people have got to understand that a defeat in Iraq, in other words if this government there fails, the terrorists will be emboldened, the radicals will topple moderate governments. I truly believe that this is the ideological struggle of the 21st century. And the consequences for not achieving success are dire."

Mr. Bush added that when he thinks about potential threats, his biggest fear is that "somebody will come in, slip into this country and kill Americans.

"And I can't tell you how. You know, one way to look at it is we have to be right 100 percent of the time in order to protect this country, and they got to be right once," he said.

You can see much more of Couric's interview with President Bush on our CBS News 9-11 Special — "Five Years: How Safe Are We?" tonight at 10 (9 p.m. Central).