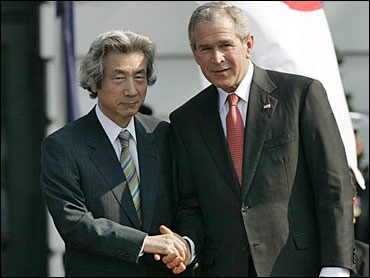 President Bush on Thursday warned North Korea not to test-fire a long-range missile, saying Pyongyang must tell the world its intentions for any launch.

Mr. Bush said that he and the Japanese leader discussed concerns about what is loaded onto the missile and where North Korea intends to aim it. He asked for "a full briefing" from the North Koreans about their intentions.

"There have been no briefings as to what's on top of the missile. He hasn't told anybody where the missile's going," the president said in a reference to North Korean leader Kim Jong Il. "He has an obligation, it seems like to me and to the prime minister, that there be a full briefing to those of us who are concerned about this issue as to what his intentions are."

Said Koizumi, through a translator: "Should they launch a missile, that will cause various — we would apply various pressures. ... I believe it is best that I do not discuss what specific pressures we were talking about."

"The Japanese cannot afford to be held hostage to rockets. And neither can the United States or any other body that loves freedom," the president said. "And so one really interesting opportunity is to share and cooperate on missile defenses."

At their news conference, Mr. Bush thanked Koizumi for opening his country's market to American beef, a thorny trade dispute that created tension in a tight personal relationship the two leaders have used to strengthen bilateral ties.

"I think the Japanese people are going to like the taste of U.S. beef," Mr. Bush said of the agreement that gives U.S. ranchers access to a lucrative export market. "As a matter of fact, I had a good slice of U.S. beef last night and you told me you did as well. And you look like you're feeling pretty good."

Asserting Japan as an emerging player on the world stage, Koizumi said he and Mr. Bush discussed bilateral issues as well as international ones, including Iraq, Afghanistan, poverty and North Korea.

"In the meeting, we discussed not just Japan-U.S. bilateral relations, but numerous challenges that the world community faces today," Koizumi said.

Earlier, in welcoming Koizumi to the White House, Mr. Bush thanked the prime minister for Japan's support in Iraq and Afghanistan, and for its help in confronting North Korea about its nuclear weapons ambitions.

"Decades ago our two fathers looked across the Pacific and saw adversaries, uncertainty and war," Mr. Bush told the prime minister at an elaborate arrival ceremony on the South Lawn. "Today their sons look across that same ocean and see friends and opportunity and peace."

Koizumi said there has been no other world leader besides the U.S. president with whom he has felt so much "heart-to-heart" friendship and trust. Asserting Japan's desire to enhance its role as a world leader, Koizumi said he and Mr. Bush would discuss bilateral issues as well as global challenges.

"I sincerely hope that my visit this time will enable our two countries to continue to cooperate and develop together and, as allies in the international community, make even greater contributions to the numerous challenges in the world community," said Koizumi, who stopped to shake the hands of Japanese-American children who attend a Japanese-language school in Washington.

It is a farewell tour for Koizumi before he steps down in September. The prime minister is a stalwart member of a dwindling group of world leaders willing to stand by the beleaguered president as bloodshed continues in Iraq and anger soars over U.S. foreign policy

Mr. Bush will fete Koizumi with a gala official dinner Thursday — standard fare for the leaders of major allies. The best indicator of how Mr. Bush feels about Koizumi will come after the policy discussions and formal gatherings end, when the president treats Koizumi to a tour Friday of the home of the prime minister's musical hero, Elvis Presley.

"Officially he's here to see the president but I know the highlight of his visit will be paying his respects to the King," joked Mr. Bush, who once gave Koizumi a juke box.

After the Bush-Koizumi news conference ended, CBS News correspondent Peter Maer reports, the Japanese prime minister, a self-described "Elvis maniac," returned to the microphone and said, "Thank you very much American people for 'Love Me Tender,'" a famous Presley song.