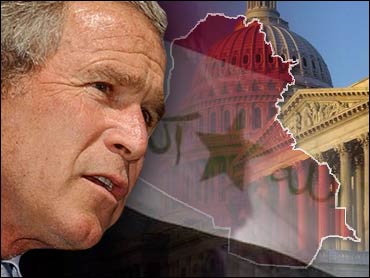 The Bush administration asked Congress Wednesday for a $25 billion down payment for next year's U.S. operations in Iraq and Afghanistan, a retreat from the White House's earlier plans not to seek the money until after the November elections.

The money — half of what White House officials have said they expect to need for 2005 — is designed to carry the military through the first months of the new budget year, which starts next Oct. 1. Congress is likely to be adjourned for much of that period, and the Army in particular would be expected to face a cash crunch unless funds were approved beforehand.

"While we do not know the precise costs for operations next year, recent developments on the ground and increased demands on our troops indicate the need to plan for contingencies," President Bush said in a statement. "We must make sure there is no disruption in funding and resources for our troops."

"I certainly expect so," Frist told reporters afterward when asked whether Congress would approve the funds. "It's for our troops."

The proposal comes amid an intensified Iraqi insurrection that has inflicted steady casualties on Americans and forced the Pentagon to plan on keeping more troops in the country next year than the administration had planned.

It also comes with the administration and the military facing widespread criticism at home and abroad for the abuse of Iraqi war prisoners.

The White House, too, faced growing demands from lawmakers of both parties in recent weeks that the money for Iraq needed to be approved before Congress adjourns this fall.

Democrats criticized the Bush proposal because they said it was well short of what will really be needed.

Rep. David Obey, D-Wis., top Democrat on the House Appropriations Committee, said the request would fall short by least $40 billion. With this year's expected record deficit looming as a campaign issue this fall, Obey said the shortfall was intentional.

"What it demonstrates is that they tried simply to avoid showing any of the costs before the election," Obey told reporters. "Now they are asking for the least they can possibly ask for ... concealing the full costs."

The administration will seek more money for next year "when we can better estimate precise costs," Bush said.

Democratic presidential candidate Sen. John Kerry said it was too early to tell if he would support the proposal. The Massachusetts senator said U.S. troops "need to get what they need," but he faulted the administration for failing to provide them promptly with body armor and humvee trucks.

Underlining how Iraq has become a political issue, the Democratic National Committee took the unusual step of commenting on a spending proposal, saying it was insufficient and misleading.

"The troops deserve our full support, but that does not change the fact that this president has a staggering credibility problem on Iraq," said DNC spokesman Jano Cabrera.

The administration provided few details, but officials said all the money would be for the military. The funds would add to the federal deficit, though all $25 billion probably would not be spent next year.

Even before Wednesday's request, Congress had provided $165 billion for the Pentagon for Iraq, Afghanistan and anti-terror efforts at home and abroad since the Sept. 11, 2001, attacks, according to an October 2003 report by the Congressional Research Service.

Unlike those bills, administration officials did not characterize the new request as urgent, participants in Wednesday's meeting said. House Appropriations Committee Chairman Bill Young, R-Fla., said the $25 billion would probably be attached to the regular defense spending bill for next year, which he said would be completed by the time Congress adjourns for the fall elections.

In February, Bush's budget omitted any funds for U.S. military and reconstruction activities in Iraq and Afghanistan next year. Bolten said at the time that the administration's 2005 request for Iraq could be up to $50 billion and said the request would not come until at least January.

For months, administration officials stood by that timetable, insisting they had enough money to last until the new year.

In recent weeks, administration officials raised the possibility that they might need extra money for the final weeks of this fiscal year; many members of Congress said they believed billions will be needed.

Lawmakers leaving Wednesday's meeting said administration officials said they expected to make it through this year's final five months if they are given authority to shift funds among different accounts in the Pentagon's budget.

As recently as Monday, a senior administration official played down the need for money right now for U.S. forces in Iraq and Afghanistan.

Bush "has not been told that there is a resource problem," said the official, who spoke on condition of anonymity.

That official also said there was currently enough money for reconstruction in Iraq.

Of $18.4 billion provided last November for rebuilding that country's economy and government, less than $2.8 billion has been spent or is owed to contractors, according to the Coalition Provisional Authority, the U.S.-led agency governing Iraq.