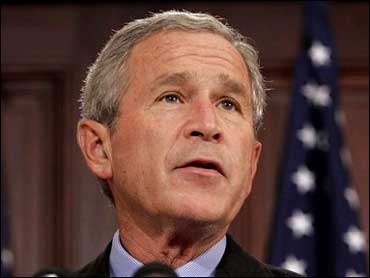 President Bush said Saturday that Americans will come together and make the Gulf of Mexico area hit by Hurricane Katrina "more vibrant than ever," just as they rebuilt after the devastation brought by terrorist attacks four years ago this weekend.

Bush plans to mark Sunday's fourth anniversary of the Sept. 11, 2001, terrorist attacks by remembering the victims of that tragedy and of Hurricane Katrina.

"Our greatest resource in such times is the compassionate character of the American people, because even the most destructive storm cannot weaken the heart and soul of our nation," the president said in his weekly radio address. "America will overcome this ordeal, and we will be stronger for it."

Democrats said Bush and the Republican-controlled Congress had not learned a painful lesson from Sept. 11: America must be ready for disaster. Rep. Bennie Thompson of Mississippi, in his party's radio address, said hurricane victims were suffering because the government was unprepared.

Thompson said Republicans in Congress had cut first-responder homeland security programs by $604 million this year, and that Bush had requested a further cut of $1.1 billion for fiscal year 2006.

"This is funding for resources on the local level to defend our families, protect our communities and respond during times of crisis. Diminishing the ability of our sheriffs, police, firefighters and all first responders to get the job done is simply unacceptable.

"We need a real citizen preparedness plan, one that takes care of children, the elderly and the disabled," Thompson said. "Mothers and grandmothers should not drown in nursing homes because help never arrived."

Bush did not note widespread complaints about government handling of the disaster, instead calling on Americans to help with recovery by contacting the USA Freedom Corps volunteer network. He also noted that he had signed spending bills this week to provide an additional $52 billion for response and recovery, and called for special evacuee status for people in disaster areas so they could more easily collect federal benefits.

Bush often talks about Sept. 11 when he is under public scrutiny, and Sunday's anniversary was a natural occasion to reminisce about the attacks as he faces criticism for a slow government response to the hurricane and subsequent flooding. In his radio address, he drew similarities to the two catastrophes.

"Today, America is confronting another disaster that has caused destruction and loss of life," the president said in his prerecorded broadcast. "This time the devastation resulted not from the malice of evil men, but from the fury of water and wind."

Bush's plans for Sunday's anniversary include a memorial church service and moment of silence at the White House before he makes his third trip to the states hit by the hurricane.

"Four years later, Americans remember the fears and uncertainty and confusion of that terrible morning," he said, referring to the Sept. 11 attacks in New York City and Washington, DC. "But above all, we remember the resolve of our nation to defend our freedom, rebuild a wounded city, and care for our neighbors in need.

"Even in the deepest darkness, we can see the light of hope, and the light shows us the way forward," he said. "We will honor the memory of those we have lost; we will comfort the victims of Katrina; and we will make the Gulf Coast more vibrant than ever."