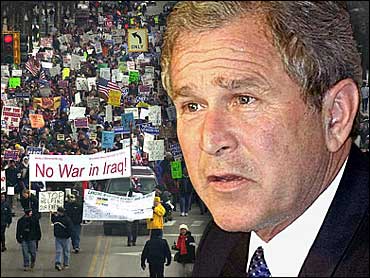 Saying he "respectfully disagreed" with the millions who protested a possible war this weekend, President Bush Tuesday said military action against Iraq is a "last choice," but one he still might make.

"The risk of doing nothing is even a worse option as far as I'm concerned," the president said.

Mr. Bush told reporters at the White House that he owes it to the American people to "secure this country," and sees Saddam Hussein as a "threat to America."

The global anti-war protests have put the White House on the defensive. Presidential spokesman Ari Fleischer began his daily briefing by reading newspaper clips about demonstrations against the staging of missiles in Germany in the early 1980s, and said, "This is not the first time there have been mass protests and in a previous instance America stood on principle … and as a result the Berlin Wall came down."

Mr. Bush indicated that he was running out of patience. Asked if he planned to set an ultimatum for Saddam's compliance, Mr. Bush suggested that would be pointless, like extending "another, another, another last chance."

U.S. Ambassador John Negroponte and British Ambassador Jeremy Greenstock met Monday afternoon to discuss the content and timing of a second resolution, which diplomats say will likely be circulated late Wednesday after a two-day open debate on Iraq in the Security Council.

The new resolution could be circulated at the end of a two-day session during which non-council members can speak. It was requested by South Africa, head of a group of 115 non-aligned countries that overwhelmingly oppose the war.

U.S. and British diplomats said they expect Security Council negotiations on the draft to be wrapped up by the time chief weapons inspector Hans Blix delivers his next report March 1.

Signaling the opposition ahead, French President Jacques Chirac said Monday his country would oppose any effort to draft a new U.N. resolution to explicitly authorize war against Iraq at this time.

France, Russia and China — all with veto power as permanent council members — are pushing to prevent what they call a rush to war and let inspectors do their work.

CBS News Correspondent Elaine Cobbe reports French Prime Minister Jean-Pierre Raffarin said France is not now planning to use its Security Council veto. He said France would use it to block a resolution authorizing war if it had to, but that does not appear to be necessary now because a majority on the council opposes such a measure.

Among the 10 non-permanent members, only Spain fully backed Washington and London in Friday's debate.

Nonetheless, officials in London and Washington were moving ahead, toning down what was supposed to be a very tough resolution. Diplomats said the final text will place Iraq in material breach of its obligations and reiterate that Saddam now faces serious consequences, but it likely will not make an explicit call to arms.

On Monday, leaders of the 15-member European Union papered over their bitter divisions on Iraq, issuing a joint statement declaring that Europe wants Iraq's peaceful disarmament and "force should be used only as a last resort."

The EU made clear that Iraq has "a final opportunity" and "must disarm and cooperate immediately and fully" or face the consequences.

As CBS News Correspondent Bill Plante reports, the White House sees the European Union declaration calling on Iraq to disarm as a victory for the U.S. position — and a setback for the French and Germans.

However, there was still strong support for continued, possibly increased U.N. weapons inspections. The statement gave no indication of how much longer inspections should continue, but said they could not go on forever without Iraqi cooperation

Over the next few weeks, Security Council diplomats said, the negotiations will focus on defining "a last resort" — the issue that has divided Europe.

The signs of that division — which led to a nasty diplomatic impasse at NATO last week — surfaced again at the EU meetings, which included countries that may soon join the union.

When these countries signaled support for Washington's position, Chirac told reporters: "It is not really responsible behavior, it is not well brought-up behavior. They missed a good opportunity to keep quiet."