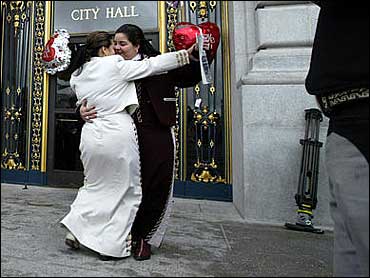 President Bush said Wednesday he was troubled by gay weddings in San Francisco and by legal decisions in Massachusetts that could clear the way for same-sex marriage. He declined to say whether he was close to backing a constitutional ban.

"I have watched carefully what's happening in San Francisco, where licenses were being issued, even though the law states otherwise," Mr. Bush said. "I have consistently stated that I'll support a law to protect marriage between a man and a woman. Obviously these events are influencing my decision."

He didn't answer directly when asked whether he is any closer to endorsing a constitutional ban on same-sex marriages, as conservative groups say the White House has assured them the president will do.

"I strongly believe marriage should be defined as between a man and a woman," President Bush said during an Oval Office session with Tunisian President Zine El Abidine Ben Ali. "I am troubled by activist judges who are defining marriage."

"People need to be involved in this decision," Mr. Bush said. "Marriage ought to be defined by the people not by the courts. And I'm watching it carefully."

Laura Bush says gay marriages are "a very, very shocking issue" for some people, a subject that should be debated by Americans rather than settled by a Massachusetts court or the mayor of San Francisco.

Asked how she feels about the issue personally, Mrs. Bush replies: "Let's just leave it at that."

Mrs. Bush also endorsed sexual abstinence programs for teens, which are slated to get double their current funding under the president's latest budget proposal.

White House spokesman Scott McClellan said the president recognized that gay marriage is a divisive topic. But, he said, "This is an issue where he believes it is important for people to stand up on principle."

"George Bush basically in the State of the Union declared war on us and those who would destroy the sanctity of marriage," said newlywed Greg Brevoort, "and he said it with the same fervor that he declared war on terrorists — and we're not terrorists."

Gay and lesbian couples from Europe and more than 20 states have lined up outside the ornate San Francisco City Hall since city officials decided to begin marrying same-sex couples six days ago. City officials said 172 couples were married Tuesday, a pace that would bring the total number who have taken vows promising to be "spouses for life" to over 3,000 by Friday.

As conservative groups Tuesday vowed to take their case to higher courts, Mayor Gavin Newsom said the weddings would continue.

"We're still moving forward, business as usual at city hall," he said. "This is a long road, and I am resolved, more resolved today than ever."

Lawmakers are proposing a constitutional amendment that would define marriage as a union between one man and one woman, and the Legislature resumes its deliberations of amendments on March 11.