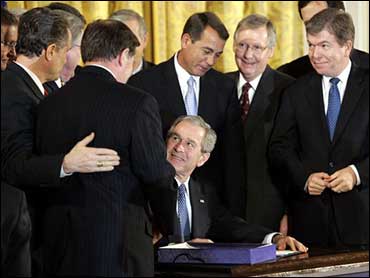 President Bush signed a measure Wednesday that trims Medicaid and Medicare spending over the next five years, but he said Congress must make bigger changes as baby boomers retire.

But because of errors committed by the House and Senate clerks who officially enroll bills that are transmitted between the chambers and on to the White House, the bill signed by Bush is technically different than the measure that passed the House.

That raises questions as to whether the bill signed by Bush is now a law or whether the GOP-controlled Congress needs to find a way to fix the error. The version signed by Bush was consistent with Congress' intent, but the technical errors could create headaches.

President Bush said programs such as Medicare, Medicaid and Social Security are the biggest long-term challenge to the budget. Even after the cuts he signed into law, the growth rates projected for the programs are unsustainable, he said.

"By 2030, spending for Medicare, Medicaid, and Social Security alone will be almost 60 percent of the entire federal budget," Bush said just before signing the Deficit Reduction Act in the East Room of the White House.

"That will leave future generations with impossible choices — staggering tax increases, immense deficits, or deep cuts in every category of spending," the president said.

He defended his budget blueprint for the coming fiscal year in the face of critics from both parties who say he is shaving too much from Medicare and other programs. He said his critics are thinking like free-spending Europeans.

"There are some that, frankly, whose policies would make us look more like Europe than we should, and that is kind of a centralization of power," Bush said in a visit Wednesday to tax-averse New Hampshire. "The surest way to centralize power is to take more of your own money to Washington."

President Bush's proposal for the budget year that begins Oct. 1 asks Congress to trim Medicare spending by $35.9 billion over five years, allowing the program to grow at a rate of 7.7 percent instead of 8.1 percent currently projected.

"It is the difference between slowing your car down to the speed limit, or putting your car into reverse," Bush said both at the White House and before the Business and Industry Association in Manchester, N.H.

Meanwhile, Congressional Republicans on Wednesday shunned President Bush's election-year call to cut Social Security benefits, and one committee chairman accused the administration of seeking to end "a pittance for widows and widowers."

"I have no plans to pursue these proposals," said GOP Sen. Charles Grassley of Iowa, chairman of the Senate Finance Committee.

The budget that President Bush submitted to Congress on Monday proposes eliminating a $255 lump-sum death benefit that has been part of Social Security for more than 50 years. It also urges Congress to cut off monthly survivor benefits to 16- and 17-year-old high school dropouts.

If approved, the two proposals would save a combined $3.4 billion over the next decade, according to administration estimates.

Based on early reaction, or lack of it, prospects for congressional passage seemed remote.

Democrats hastened to criticize the proposals on Tuesday and continued their attack into a second day.

The bill he signed is a leftover measure from his 2005 agenda. The measure aims to trim $39 billion out the of budget over five years, partly through small cuts to Medicaid, Medicare and student loan subsidies.