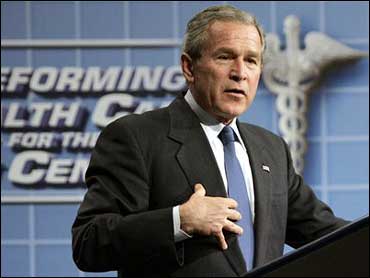 President Bush, in a state with key races in this year's midterm elections, countered critics on Wednesday who say health savings accounts don't help the poor or the uninsured.

Enrollment in health savings accounts has tripled during the past 10 months, the president said at the headquarters of Wendy's, where 9,000 employees have signed up for the accounts since the company began offering them last year.

The president also acknowledged startup problems with the Medicare prescription drug plan. In recent weeks, some of the poorest beneficiaries had trouble getting their medicine and were charged more than what they paid under Medicaid. Dozens of states were forced to step in to help pay for their medicine on an emergency basis.

About 43 million people are eligible for the benefit. Mr. Bush said 24 million have signed up, but a large majority were automatically enrolled because of their participation in other programs, such as Medicaid. About 3.6 million people have voluntarily enrolled.

"When you've got that big a shift, you can imagine there's going to be glitches, but by far, the vast majority of people are signed up to a program that's making a big difference in their lives," Mr. Bush said.

In pushing health savings accounts, Mr. Bush said people will become more responsible shoppers because they'll pay more of the initial costs of their health care. He joked that it might be a good idea for people also to choose salads more often than triple-patty hamburgers at Wendy's.

To open one of the accounts, a consumer must first buy a high-deductible insurance policy that requires an individual to pay at least $1,050 in medical expenses before the insurance would kick in; families would have to pay the first $2,100. Some policies carry higher deductibles.

Mr. Bush wants to let consumers put enough money in their health savings accounts to cover all their health insurance costs, not just the deductibles, as provided by current law. This would allow them to set aside more money tax-free.

But Democrats argue that the accounts don't help those in need. They say it takes money to pay premiums on the high-deductible insurance policies, and that the working poor do not have extra money to set aside in the accounts.

Brian Rothenberg, communications director for the Ohio Democratic Party, said Ohio was an odd place for Mr. Bush to push health savings accounts because the state, in recent years, has lost more than 200,000 manufacturing jobs. The jobless rate in Ohio is 5.9 percent, above the 4.7 percent national rate in January.

The majority of Americans with health insurance are covered through employer-sponsored plans. Those who aren't are either jobless or underemployed.

"Try telling somebody who is underemployed, or working at Wendy's, that they should put money in a health savings account," Rothenberg said. "That's not a partisan issue. That's a practical issue. Sometimes I think the White House makes decisions in a bubble. Why he would come to a place that's bleeding jobs like Ohio and talk about health care is beyond me."

Mr. Bush said the accounts are attractive to people on the lower side of the income scale. The administration points to recent studies that show that of the 3 million people who have taken up HSAs, 37 percent were previously uninsured and 40 percent earned less than $50,000 a year.

The visit to Ohio was one of a series of trips Mr. Bush is making to underscore themes in his State of the Union address. But it had a political component too. About a half-dozen House and Senate seats from Ohio are competitive in this year's midterm election, including a few in the Columbus area.

But Republican incumbents now are facing possible fallout from an election-year scandal in the state. Outgoing Republican Gov. Bob Taft and two former aides have pleaded no contest to ethics charges in connection with the investigation of a coin dealer and GOP fundraiser hired to manage a state investment in rare coins. The coin dealer, Tom Noe, was charged Monday with embezzling at least $1 million.

Mr. Bush was joined at the event by Taft, George V. Voinovich, R-Ohio, and Reps. Pat Tiberi, David Hobson and Deborah Pryce. Sen. Mike DeWine, R-Ohio, who is a toss-up race against Democratic Rep. Sherrod Brown, was invited, but had a previously scheduled event.