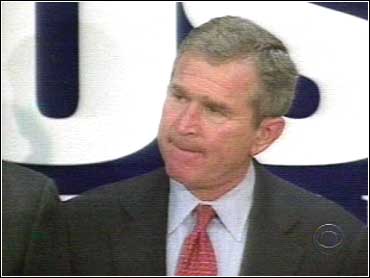 President Bush toasted the nation's governors at a White House dinner for "displaying leadership at a time history demanded it."

The president has drawn on the talent of governors in putting together his administration and he praised the governors visiting on Sunday night from the winter meeting of the National Governors Association. The governors joined the president in the State Dining Room for a dinner of roasted rack of lamb, crab cakes and baked coconut custard cake. They were later entertained by the singing of Bernadette Peters.

But first, Bush talked quietly about the crisis facing the nation.

"Since we last met, America's been attacked and it's been wounded by terrorists," Bush said. "Since then, we've been inspired by acts of courage and generosity.

"We're determined to protect the American people by fighting terror wherever it's found," Bush said. "This cause will take years, and require the patience of the American people and it will require participation of all levels of government and we've made a very good beginning."

The president praised the governors for their work on homeland defense.

"I've been inspired by your leadership, I was touched by my friend (New York Gov.) George Pataki's calm demeanor in the crisis in New York, I know our nation needs to develop a national strategy to protect the homeland, and that's why I picked a fellow governor, my good friend Tom Ridge (former Pennsylvania governor) to lead the effort."

Former governors in the Bush administration include Attorney General John Ashcroft of Missouri, Health and Human Services Secretary Tommy Thompson of Wisconsin and the head of the Environmental Protection Agency, Christie Whitman of New Jersey.

Bush said the "governors have displayed leadership at a time history demanded it."

"So it is with deep respect and gratitude that I offer this toast ... to the governors."

Gov. John Engler of Michigan, chairman of the governors group, offered their salute to Bush.

"I can only imagine what the history books will say about your outstanding leadership at this very difficult time in our nation's history, Mr. President ... the way you have led our nation, unified our people, articulated the mission, conducted the war and other wise distinguished yourself has been an inspiration for us all."

Earlier in the day, governors talked about possible approaches to deal with the fast-growing cost of Medicaid, which they say threatening to engulf state budgets.

"Medicaid's costs are consuming he ability of states to look after their primary function of security for our people and education of our young people," said Kentucky Gov. Paul Patton, vice chairman of the NGA. Medicaid is using up to a fifth of many state budgets and the costs are growing fast with the rising cost of all health care and prescription drugs.

Engler, chairman of the governors group, said governors need to examine whether the 7 million seniors and disabled people who qualify for both Medicare and Medicaid, a program for poor Americans, should be shifted to Medicare. He said Medicare is more of a federal responsibility, while Medicaid is more of a burden on the states.

"Medicaid is the bobsled of government spending," said Arkansas Gov. Mike Huckabee. "Once you push it off the track, you can't reverse it, you can't slow it down."

The governors say their ability to cut Medicaid spending is limited by federal rules and that even with cuts, states will need additional funding.

Additional federal Medicaid funding was included in economic bills considered by Congress this winter, but nothing was passed and sent to the president, Engler said. The Bush administration has offered flexibility on how Medicaid money can be used, but could do even more, Engler said.

The governors also talked about forming a commission, including some within their own ranks, to look at the Medicaid problem long-term.