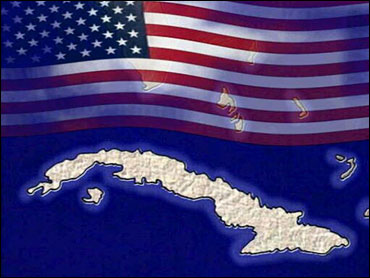 President Bush, declaring "we are working for the day of freedom in Cuba," took steps Thursday to end jamming of U.S. broadcasts to the island as part of a tough new strategy to hasten the demise of communist rule.

Mr. Bush decided to order deployment of military aircraft to transmit signals of the Miami-based Radio Marti and TV, an effort to end Cuba's jamming of U.S. government broadcasts. The measure was one of a number of recommendations in a report prepared by a government commission on Cuba headed by Secretary of State Colin Powell.

"We are working for the day of freedom in Cuba," said Mr. Bush, speaking during a meeting with commission members in the Roosevelt Room of the White House.

The president said he also is encouraging steps to promote human rights on the island. He said he also will try to prevent the Cuban regime from exploiting the hard currency of tourists to prop up the government.

The commission's mandate was to propose steps to hasten an end to communist rule in Cuba and to provide ideas on ways to assist a post-Castro government.

TV Marti has been jammed since its inception in 1990. Jamming of Radio Marti began almost simultaneously, five years after it first went on the air.

Before President Bush spoke, a senior official, speaking on condition of anonymity, said the president was not expected to reduce the $1,200 a year ceiling on transfers to needy Cuban families by Cuban-American relatives.

Frank Calzon, executive director of the anti-Castro Center for a Free Cuba, said a decision to maintain the ceiling rather than slash it would be welcome news because it would deprive the Cuban leader of a "propaganda victory."

The commission urged increased support for Cuban dissidents and families of political prisoners. In addition, it called for measures to encourage foreign governments to distance themselves from the Cuban regime.

The official said the anti-jamming plan contemplates an "airborne platform to break through the information logjam" that Cuba has imposed against the two stations.

With all local media under state control, Cubans have little access to information that is not approved by the government.

The plan involves use of C-130's that will fly over international waters adjacent to the island. Operations are expected to begin in a few months.

The Cuba commission was set up last October with a May 1 deadline for making its recommendations to Mr. Bush.

On Tuesday, Rep. Robert Menendez, an anti-Castro New Jersey Democrat, said Mr. Bush's harsher stance against Cuba is aimed at pleasing Cuban-American voters. Setting up a commission with a deadline "virtually on the eve the election" is "so politically transparent that it would be laughable except for all people who are languishing inside of Cuba," Menendez said.