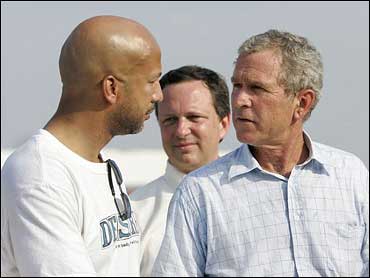 President Bush intends to seek $40 billion to cover the next phase of relief and recovery operations from Hurricane Katrina, a congressional official said Tuesday as leading lawmakers and the White House pledged to investigate an initial federal response widely condemned as woefully inadequate.

One week after the storm spread death and destruction across a swath of the Gulf Coast, Senate Minority Leader Harry Reid, D-Nev., said the total tab for the federal government may top $150 billion.

Stung by the criticism, Mr. Bush invited congressional leaders to the White House for an afternoon meeting, their first since the hurricane hit the Gulf Coast and left much of New Orleans underwater.

"Bureaucracy is not going to stand in the way of getting the job done for the people," the president told reporters earlier in the day after meeting with his Cabinet to review storm recovery efforts.

At the Capitol, Sen. Susan Collins, R-Maine, said she intended to hold an initial hearing of the Governmental Affairs Committee next week into the aftermath of the storm. "It will focus on the way ahead," she said. An investigation into the faults of the recovery effort will be deferred until "after the situation is stabilized and people are no longer in danger."

"Government at all levels failed," Collins said. "It is difficult to understand the lack of preparedness and the ineffective initial response to a disaster that had been predicted for years, and for which specific, dire warnings had been given for days."

Mr. Bush and the Republican majority in Congress sought to underscore their commitment to help for the damaged region while the Senate's top Democrat said the overall cost could top $150 billion.

"I believe that the recovery and relief operations will cost up to and could exceed $150 billion. FEMA alone will likely require $100 billion in additional funding," he said in a statement issued after he talked with relief officials and Sen. Mary Landrieu, D-La. An aide to Reid, Rebecca Kirszner, added, "Our priorities right now are targeted assistance for health care, housing and education."

The storm and ensuing flood has left an unknown number of people dead, uncounted thousands of homes and businesses damaged or destroyed and turned hundreds of thousands of Americans into evacuees. Many are poor and normally receive welfare. Others are sick and are now cut off from their health care and prescription medication. Still others are school-age and will suddenly find themselves enrolled in schools not built to accommodate them.

"What I intend to do is lead an investigation to find out what went right and what went wrong," Mr. Bush said. "We still live in an unsettled world. We want to make sure we can respond properly if there is a WMD (weapons of mass destruction) attack or another major storm."

But Mr. Bush said now is not the time to point fingers and he did not respond to calls for a commission to investigate the response.

"One of the things people want us to do here is play the blame game," he said. "We got to solve problems. There will be ample time to figure out what went right and what went wrong."

The Senate also announced plans for hearings into what Sen. Joe Lieberman, D-Ct., described as "the nightmare that Katrina caused and exposed."

Congress formally returned from a five-week summer break during the day, signaling that the hurricane would take top billing on the agenda in the coming weeks.

The response "needs to be first and foremost," said Majority Leader Bill Frist, although he, like the president, stressed the GOP goal of confirming John Roberts as the next chief justice by the time the Supreme Court convenes on Oct. 3.

Congress approved $10.5 billion as an initial downpayment for hurricane relief last week, and Senate Democrats were consulting among themselves in advance of the White House meeting.

One official, speaking on condition of anonymity, said it was possible Democrats would request as much as $50 billion as a next installment.

There has been heavy criticism of the government's response to the hurricane, and city and state officials, Republicans and Democrats have assailed the Federal Emergency Management Agency led by Michael Brown. Mr. Bush, during an inspection tour of the devastated region last Friday, praised Brown, telling him, "Brownie, you're doing a heck of a job."

Mr. Bush did not respond directly when asked if anyone on his disaster response team should be replaced.

The president said that he and his Cabinet members were focused on planning in several areas of immediate need — restoring basic services to affected areas, draining the water from New Orleans, removing debris, assessing public health and safety threats and housing for those displaced by the storm. "Most importantly," he said, officials are trying to figure out how to get Social Security checks to people now scattered across the country in private homes, churches and other shelters.

"This administration is not going to rest until every life is saved, until every family is reconnected, until the recovery is complete," he said.

White House spokesman Scott McClellan said the president also was increasing what he described as a sizable personal contribution to the Red Cross and also was sending money to the Salvation Army.

Earlier, McClellan rejected suggestions that the poor, and particularly blacks, had been abandoned when New Orleans was evacuated.

"I think most Americans dismiss that and know that there's just no basis for making such suggestions," McClellan said. "We are focused on saving and sustaining lives of all those who have been affected."