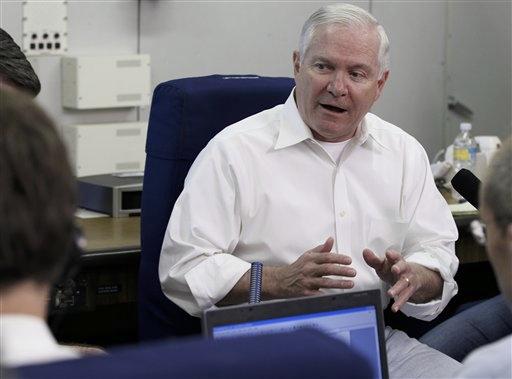 At a joint White House news conference, Mr. Bush and British Prime Minister Tony Blair pledged their support for a fresh stab at peace. The president said it was up to Palestinians to elect a democratic government and Arafat's successors to allow freedoms to take root.

"We'll hold their feet to the fire to make sure that democracy prevails," he said.

Mr. Bush, whose policy in Iraq frayed relations with France, Germany and other traditional allies, also said he intends to travel to Europe as soon as possible after his second inaugural, on Jan. 20.

He said he looked forward to using the "combined strength of Europe and America" to advance freedom.

The leaders spoke from the stately East Room shortly after the Palestinian leader was laid to rest in a chaotic scene in Ramallah. The Mr. Bush and Blair governments hope a change in Palestinian leadership might open new avenues toward peace.

There was fresh news, too, in Iraq, a chilling reminder of the perilous life of the Middle East: Insurgents downed a U.S. Army Black Hawk helicopter north of Baghdad, wounding three crew members. In their two days of meetings, Blair had hoped to shift Mr. Bush's attention from Iraq to the stalled Mideast peace process.

While the president coupled his call for a Palestinian state with his unwavering support of Israeli security, Blair stressed the need to bolster Palestinians.

"If we want a viable Palestinian state, we want to make sure the political, the economic and the security infrastructure of that state is shaped and comes into being," the British prime minister said.

"We've got the chance over the next few months, with the election of a new Palestinian president, to put the first marker down," Blair said.

Mr. Bush didn't commit to a Mideast conference or sending a U.S. envoy to the region — two items sought by Europeans. But he did talk more optimistically than usual about the prospects for a Palestinian state.

He said there was a "new opportunity" for resolving the decades-old stalemate and put the onus on the new Palestinian leadership.

The United States is "looking forward to working with Palestinian leaders who are committed to fighting terrorism and committed to democratic reform," Mr. Bush said.

Arafat was viewed as a hero by Palestinians, a terrorist by Israel. Mr. Bush refused to deal with the Palestinian leader in his final years.

The president sounded cool about the prospects of attending an international conference on Middle East peace. "I'm all for conferences," he said, "just as long as a conference produces something."

Blair lost political ground at home for being Mr. Bush's steadfast comrade in the U.S.-led war in Iraq that was unpopular in Europe.

Mr. Bush dismissed critics of Blair who call the British prime minister a lackey of the United States. "He's plenty capable of making up his own mind" on Iraq and other issues, Mr. Bush said. "When times get tough, he doesn't wilt."

Blair needs to prove his close alliance with Mr. Bush bears fruit. Many British lawmakers now expect a payback from Mr. Bush in return for Blair's loyalty, in the form of a renewed commitment to the peace process.

"British politics dictate that he needs to come back with something which is tangible evidence that he has influence in this relationship," Sir Christopher Meyer, a former British ambassador to Washington, said Friday.

Mr. Bush opened the news conference by calling Blair "a statesman and a friend" and said U.S.-British relations have never been stronger. He listed accomplishments by the nations' forces in Afghanistan and Iraq.

He warned that with upcoming Iraqi elections, "the desperation of the killers will grow and the violence could escalate." But he said victory in Iraq would be a blow to terrorists everywhere.

Mr. Bush and Blair both said they oppose any attempt by Iran to develop nuclear weapons. "There's an agreement in the international community" on that, said the British leader.