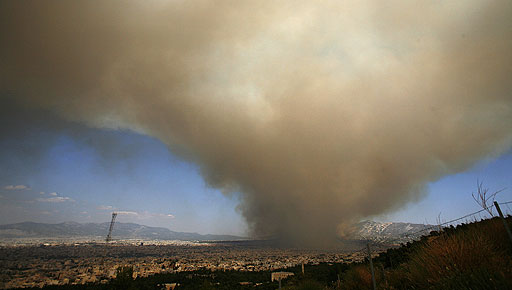 "There is a difference between being alert and being intimidated, and this nation will not be intimidated," Mr. Bush said.

The president delivered the speech to a wildly cheering crowd of 5,000 at the Georgia World Congress Center in Atlanta. Most were public servants: police officers and firefighters, postal workers and members of the Armed Forces. The crowd frequently greeted the president's remarks with storms of applause and standing ovations.

The loudest applause came at the end, when he praised the actions of passengers who fought with hijackers aboard United Airlines Flight 93 before it crashed into a Pennsylvania field. Bush recalled the words of Todd Beamer, a 32-year-old businessman and Sunday school teacher, who was overhead on a cell phone to say, "Let's roll" as passengers charged the terrorists.

"We cannot know every turn this battle will take. Yet we know our cause is just and our ultimate victory is assured," Mr. Bush said. "We will no doubt face new challenges. But we have our marching orders: My fellow Americans, let's roll."

Click here to read the full text of the president's speech.
Mr. Bush's speech had an uplifting tone, emphasizing that out of the terror and death of Sept. 11, America has emerged stronger, with a renewed spirit of pride and patriotism. He spoke before a "United We Stand" backdrop that included photos of firefighters who responded to the World Trade Center disaster.

"We are a different country than we were on September 10th: sadder and less innocent; stronger and more united; and in the face of ongoing threats, determined and courageous," the president said.

"None of us would ever wish the evil that has been done to our country, yet we have learned that out of evil can come great good. During the last two months, we have shown the world America is a great nation," he said in speech prepared for prime-time television.

Despite the upbeat tone of Mr. Bush's remarks, he conceded that the U.S. does not know who unleashed anthrax in the U.S. mail. Nor did the president offer hope that U.S. troops would soon find Osama bin Laden and destroy his Afghanistan-based terrorist network.

The address was an update on the war in Afghanistan, the anthrax scares at home and the new responsibilities of government and all Americans. The president also outlined actions the government has taken to strengthen homeland security.

"Our great national challenge is to hunt down the terrorists and strengthen our protections against future attacks; our great national opportunity is to preserve forever the good that has resulted. Though the tragedy, we are renewing and reclaiming our strong American values," Mr. Bush said.

Recognizing a desire by Americans to get involved in the fight against terrorism, the president suggested ways people can serve their country. He urged people to head into "careers of service," such as firefighting or police work.

He said people should volunteer to work in hospitals and other places on the front lines of terrorism response, such as military installations.

On Friday, Mr. Bush will announce a "dramatic increase" in the use of National Guard personnel for airport security, including the stationing of Guardsmen at airport boarding gates, an administration official said.

"Many ask what can I do to help in our fight? The simple answer is all of us can become a September 11th volunteer by making a commitment to service in our own communities," Mr. Bush said.

Mr. Bush announced that the national service groups created by former President Clinton in 1993, AmeriCorps and Senior Corps, would provide more than 20,000 government-subsided volunteers to help police, fire and public health departments and "free up" the professionals for work on the front lines of homeland defense.

The president also created a task force on citizen preparedness, which will have 40 days to give him recommendations on helping Americans prepare their homes, neighborhoods, schools and workplaces for the potential consequences of any future attacks.

"One way to defeat terrorism is to show the world the true values of America through the gathering momentum of millions of acts of responsibility and decency and service," he said.

CBS News Correspondent Peter Maer reports that Bush aides viewed the speech as the president's most crucial appearance since his Sept. 20 address to Congress.

Mr. Bush has carefully chosen the venues of major appearances since the Sept. 11 attacks, blamed on Osama bin Laden. He addressed a joint session of Congress on Sept. 20 and held the first nighttime news conference of his presidency Oct. 11 at the White House.

This time, Mr. Bush "thought it was important to leave Washington, to go out into the country to give this type of speech to the American people," White House spokesman Ari Fleischer said.