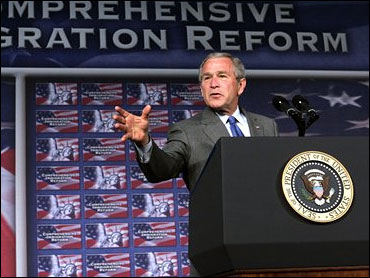 President Bush stressed the need for immigrants to adopt American values and learn English if they are to become citizens, as he paid a visit Wednesday to this heartland state where the Hispanic population is on the rise.

Mr. Bush said upon his return to Washington, he would sign an executive order creating a task force that will expand English, civics and history classes to help more foreigners assimilate into America. It will be led by Homeland Security Secretary Michael Chertoff.

"One aspect of making sure we have an immigration system that works, that's orderly and fair, is to actively reach out and help people assimilate into our country," Mr. Bush said. "That means to learn the values and history and language of America."

Mr. Bush spoke to one such classroom in Omaha. The president quizzed the students about American history in their native Spanish, then gave a speech trying to push his controversial immigration plan and acknowledging it's "a tough debate for America."

Mr. Bush's visit to Nebraska shows the uphill battle he faces to get an immigration bill. Nebraska is a solidly Republican state and the home state of Sen. Ben Nelson, a moderate Democrat who often sides with the Republican president and is up for re-election in November.

But Nelson favors the House approach of tightening border security first and is cool to the Senate proposal that would create a guest worker program that would legally bring in new foreign workers and provides a shot at citizenship for many already here.

Nelson doubts an immigration reform compromise can be reached between the House and Senate.

"The Nebraskans I know and talk to want to secure the border first," he said.

Between 2000 and 2004, the increase in the state's Hispanic population accounted for 70 percent of the state's overall growth. The number of Hispanics grew by about 26,000 while the number of non-Hispanic whites fell by 500.

Nelson's Republican colleague in the Senate, Chuck Hagel, was an outspoken supporter of the Senate measure. Mr. Bush lauded Hagel for his leadership on the issue.

Mr. Bush says he believes the House and Senate can agree on their sharply different approaches to illegal immigration as long as lawmakers haven't become too hardened in their own stances. Negotiations to reconcile the two have yet to begin and Mr. Bush said he was looking forward to them.

"That will give us a pretty good feel for whether or not attitudes are hardened to the point nothing can get done," Mr. Bush said during a stop Tuesday in the border town of Laredo, Texas. "I don't think so."

The president's two-day trip on the issue took him to the training facility for Border Patrol agents in Artesia, N.M., to a sector headquarters near the Rio Grande River and finally to the Midwest town of Omaha.

Mr. Bush visited a Catholic Charities center in Nebraska on Wednesday, stopping in a classroom where immigrants learn U.S. civics in preparation for their citizenship test. The volunteer instructor was quizzing the eight students in English, and they rattled off answers about U.S. historical figures, the three branches of government and the Constitution.

Mr. Bush entered and greeted the students in Spanish and threw them a question they weren't prepared for — how many father-son duos have served as president? The students were stumped, so Mr. Bush explained in Spanish that his father was a president and the other team was "Juan Adams y su hijo Juan Q."

Mr. Bush also used his visit to the center to get in a jab at Venezuela's fiery anti-American President Hugo Chavez.

After meeting a woman who came to the U.S. from Venezuela 25 years ago, Mr. Bush said Chavez has done "a great disservice to the traditions and people" of his country.

Venezuela is a major supplier of oil to the United States, but relations between Chavez, a leftist ally of Cuba's Fidel Castro, and the Bush administration have sharply deteriorated.

But, he added: "It's going to take a while. Sometimes leaders show up who do a great disservice to the traditions and people of a country."