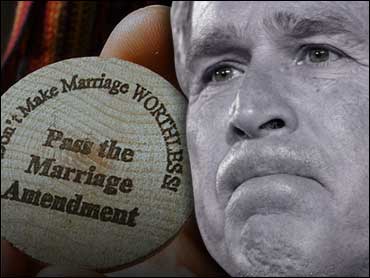 President Bush will back a U.S. constitutional amendment banning gay marriage in an attempt to halt same-sex unions like the thousands that have been conducted this month in San Francisco, his spokesman said Tuesday.

"He has always strongly believed that marriage is a sacred institution between a man and a woman," White House press secretary Scott McClellan said.

He said the president wants to end "growing confusion" that has arisen from court decisions in Massachusetts, and San Francisco's permitting more than 3,000 same sex unions.

"The president believes it is important to have clarity," McClellan said.

He said Mr. Bush believes that legislation for such an amendment, submitted by Rep. Marilyn Musgrave, "meets his principles" in protecting the "sanctity of marriage" between men and women.

But Mr. Bush was not expected in his announcement Tuesday to specifically embrace any particular piece of legislation. White House officials say that support for Musgrave's proposed amendment has been unraveling in the Senate.

Mr. Bush decided to take action partly because the Massachusetts Supreme Judicial Court recently ruled that it is unconstitutional to bar gay couples from marriage. That decision could result in gay weddings there as early as May, McClellan said. "We're two months away," he said.

McClellan said 38 states have passed laws protecting the "sanctity of marriage and the president will call on Congress to move quickly to pass legislation that can then be sent to the states for ratification.

"We need to act now," he said. "The constitutional process will take time."

The federal Defense of Marriage Law exempts states who oppose gay marriage from having to recognize same-sex marriages from out of state.

Mr. Bush had shown some reluctance to push for a constitutional amendment, refusing to call for it for several months.

In his State of the Union speech he said, "If judges insist on forcing their arbitrary will upon the people, the only alternative left to the people would be the constitutional process. Our nation must defend the sanctity of marriage." As recently as last week, he said of the San Francisco marriages, "I'm watching very carefully."

More than 3,000 same-sex couples have been married since San Francisco Mayor Gavin Newsom decided to give out the licenses Feb. 12.

There has been no violence associated with the San Francisco marriages.

In Massachusetts, state lawmakers frustrated by two days of failed dealmaking on the issue temporarily threw in the towel on Feb. 13, halting their constitutional convention until March 11.

The lawmakers are responding to a state court ruling that gay marriage would be the only way of satisfying an earlier ruling that found the current lack of gay unions was unconstitutional.

Even if enough votes are found to support a constitutional amendment against gay marriage in the Bay State, the amendment would have to survive a series of other votes during this legislative session, and clear several more hurdles in the next two years, before getting to the ballot in November 2006.